Posted in Blu-ray Reviews by George Theofanopoulos on 18 August 2011
Detective Aurelio Zen (Rufus Sewell) is scrupulously, almost helplessly honest–which, in the woefully corrupt bureaucracies of Rome, makes everyone think he’s incompetent or perhaps a bit stupid. Zen saunters through his cases, not always ahead of things or even on the right track, yet blessed with a gift for landing on his feet when bloody events go down. In “Vendetta,” the first episode in this TV series, he investigates a seemingly shut-and-closed case while being hunted himself by someone from a past he’s forgotten; in “Cabal,” the unveiling of a sinister conspiracy hinges on a safety deposit box and an alluring high-class escort; and in “Ratking,” an opulently wealthy family grapples with a kidnapping with precarious political stakes. Throughout, higher authorities push and prod at Zen to come to a desired conclusion, while Zen himself steers towards a delicate romance with a lovely–and married–coworker, Tania Moretti (Italian actress Caterina Murino, Casino Royale). Zen delights the ear and the eye–the plots and dialogue are swift and skilled, while the locations in Rome are gorgeous. Sewell slouches around in tailored Italian suits looking like Marcello Mastraoianni’s louche little brother, dissolute on the surface but with a gleam of rectitude in his heavy-lidded eyes. He plays his part with delicious understatement, gleaning sly humor where he can, sometimes playing his cards well and sometimes desperately flailing to catch up with events that have outstripped him. And Zen may have the sexiest theme music in decades. A well-made and informative making-of featurette rounds out this satisfying set. 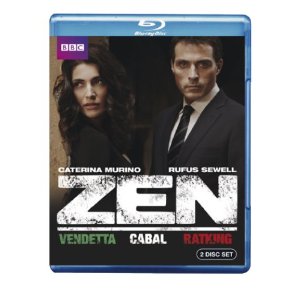 The BBC has struck it rich with this riveting detective series! Although I have not read the Michael Dibdin mysteries, and I therefore cannot say how faithful the series is to the books, I have spent nine memorable years in Rome, and I can assure viewers that as far as the locations and settings of Rome and its environs are concerned, “Zen” can be graded d’oro puro–pure gold.

The mostly British cast are at their usual best, and if the aristocratic English and slightly regional accents among the police detectives strikes an odd note at first (add to that mix the Italian accent of Caterina Murino), one soon becomes so absorbed in the story that the anomaly becomes unimportant. The mixture of British accents is analogous to what would be the mixture of university-educated detectives and the Italian version of police constables, a condition that would be lost with pseudo-Italian accents, no matter how well done, especially considering that Zen, convincingly acted by Rufus Sewell, is a Venetian. The sense of verisimilitude is maintained by extras shouting at each other every now and then in Italian (Rome is a very noisy city). The sound is especially good, down to the two-note police siren which goes flat by several keys with the doppler effect as the car passes by and heads off into the distance.

The carefully crafted plots of these crime stories hold political overtones, which, even though the books were written in the ‘eighties and ‘nineties, seem equally valid today, as little changes in a city where patronage and politics (and, unfortunately, the criminal underworld) have been walking hand-in-hand for over 2000 years–so long that the very boundaries between the spheres have become blurred. The scene which portrays Zen calling a friend who knows someone, who knows someone else, who can get an elegant apartment rent-free, rings so true that one knows that Mr. Dibdin has actually lived in Rome, where one does not get an apartment by looking in the classifieds but by knowing someone who knows someone else [This timeless state of affairs was parodied in an Italian comedy in which Nino Manfredi played a reluctant hit-man, who outsourced the job, calling his brother-in-law, who called his cousin, who called his son-in-law, etc., etc., so that the dastardly deed never got done (much to the merriment of the Italian audience).
Movie Quality: 9/10

The audio is presented in a Dolby Digital 2.0 mix. While I am not surprised that Warner would go with a Dolby Digital 2.0 mix here and not a lossless which doesn’t help the format. It is 2011 and we should be at lossless audio for our Blu-ray releases. Dialogue was front and center with no apparent issues sounding crisp. The soundfield was rather active anytime there were effects in the soundfield even though this is a dialogue driven television show. I do think that this could have sounded even better with lossless audio mix.
Print Quality: 7/10

The cast is sterling though for the most part unexplainably British in this Italian set drama (Stanley Townsend, Ben Miles, Francesco Quinn, Anthony Higgins, Garry Cooper, Adrian Schiller and Cosima Shaw) but the key to the success of this series is the solid work by Rufus Sewell.
Overall Rating: 6/10