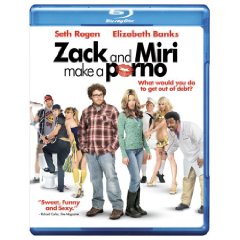 Writer/Director Kevin Smith has really done wonders bringing us some of the best comedies to be released in years. While some of his comedies haven’t been well received, his most smart and quirky ones have to be ‘Clerks’, ‘Mallrats’, ‘Chasing Amy’, and ‘Clerks II’. While the rest of his films haven’t been bad, they haven’t been groundbreaking either. One of the reasons is that they became an over bloated mess with star power and cameos. In his latest film, Kevin Smith brings things down a notch with the amount of characters on screen, but raises the bar on the content. The film wasn’t successful in theaters, but I think that this is a film that can give Smith a nice little resurgence.

The title of the film is enough to really send someone’s brain spinning, considering that stores like Wal-Mart and Target are just titling it ‘Zack and Miri’. I am not too sure if that is a wise choice either since people may pick this film up not knowing what it is about. Looking at the title myself upon seeing the theatrical trailer, I couldn’t believe that a film like this was going to be released nationwide. The more I read, it didn’t sound so bad by the name alone.

The story of the film centers around two very good friends, Zack (Seth Rogan) and Miri (Elizabeth Banks). They have been friends since they could remember and also live together in a rundown apartment complex. They are close friends that never did the deed together and have always kept their relationship on a friendship level, even though Zack has made many comments in the past. Zack works at a coffee shop where he doesn’t like his job and the money isn’t flowing in like he would like. Things are looking grim for both Zack and Miri from a financial standpoint when their water gets shutoff.

One day at the coffee shop, they begin discussing their upcoming ten year High School reunion. They had no intentions on attending, but then it becomes a joke to go see how other losers turned out. It is the night of the reunion as we see both of them mingling with others. Miri sees her old classmate Bobby Long (Brandon Routh) whom she had a crush on in High School. Miri begins flirting with Bobby, even though he doesn’t realize it. While this is going on, Zack runs into a guy named Brandon (Justin Long) that never attended the high school. He begins to tell Zack that he is an actor in films only starring other males. Zack breaks the news to Miri as she is allover Bobby that he doesn’t like women. They head back home after an interesting evening.

I actually enjoyed this film quite a bit and it still goes to show that Kevin Smith can churn out some great comedies. With an excellent cast involving Seth Rogan, Elizabeth Banks, Craig Robinson, Jason Mewes, Craig Robinson, and Jeff Anderson you will laugh from start to finish. Then add a current and former adult stars, Katie Morgan and Traci Lords into the mix for one fun filled movie viewing. While the content can be offensive, this is one comedy still worth watching, especially if you are a fan of Kevin Smith. He turns it up a notch here with the material, but underneath it is still a very good Smith film.
Movie Content: 4.5/5 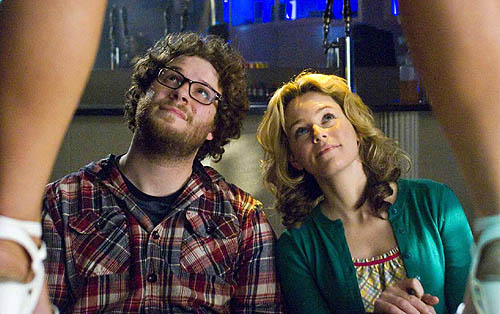 The print is presented in 1080p AVC/MPEG-4 codec with a 1.85:1 aspect ratio. I found this print to be rather eye pleasing with vibrant colors. Fleshtones are very natural and accurate, considering that we see a few bare necessities throughout. Black levels are solid throughout. The image was also sharp with excellent details. A good example of the details is to look at some of the tattoos by Jason Mewes. Even a few scenes with Katie Morgan are all I will say. There is a hint of subtle grain throughout the print which doesn’t hinder the image.
Video Quality: 4/5

The audio is presented in Dolby TrueHD 5.1 mix. This film is dialogue driven like every Kevin Smith film. Dialogue was clean through the center channel with a nice degree of depth. I never had to raise or lower the volume to make out what was being said. The soundfield does get a few effects into play, but nothing major. The soundtrack takes advantage of the soundfield with audio also lightly pouring through the rears. I found this to be more of a front heavy experience due to the type of film.
Audio Quality: 4/5 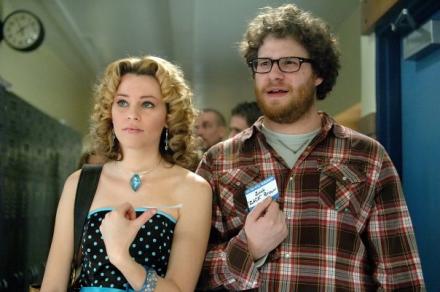