Posted in DVD Reviews by George Theofanopoulos on 04 September 2018

For 9-year-old Sheldon Cooper, being a once-in-a-generation mind capable of advanced mathematics and science isn’t always helpful in East Texas where church and football are king. And while the vulnerable, gifted and somewhat naïve Sheldon deals with the world, his very normal family must find a way to deal with him. His father is struggling as a high school football coach and as father to a boy he doesn’t understand. Sheldon’s mother fiercely protects and nurtures her son who just doesn’t fit in. Sheldon’s older brother does the best he can in high school, but he’s also in the same classes with Sheldon. Finally, there’s Sheldon’s twin sister who remains the one person who can reliably tell Sheldon the truth. For 10 years on The Big Bang Theory, audiences have come to know the iconic, eccentric and extraordinary Sheldon Cooper. Now meet him as he embarks on his innocent, awkward journey toward the man he will become. 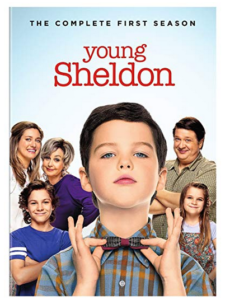 I like The Big Bang Theory so much I started watching Young Sheldon. I waited quite a while and then watched with some trepidation because grown Sheldon makes his childhood relations sound hideous. But Young Sheldon and his family are nothing like that at all. His father and “meemaw” are completely different from what’s described on TBBT. The entire cast and the stories are sweet and very likable. Well, meemaw is very likable. Annie Potts (love seeing her again) plays her as a wonderfully modern senior. Nothing like how grown Sheldon remembers her. This Sheldon is a lot of fun and has guest stars you’ll recognize. Well, when I say recognize……Jason Alexander’s appearance is exceptionally fun. He’s into his character so expertly that when you see him at first you think “hey, it’s Jason Alexander”.

Love it! I have seen every episode of The Big Bang Theory and Young Sheldon does Sheldon justice. It ties in very well with TBBT and had a great story line. They picked great actors and writers for this show. I will definitely continue to watch Young Sheldon! Highly recommend!!!!
Overall Rating: 8/10