Posted in DVD Reviews by George Theofanopoulos on 18 November 2010 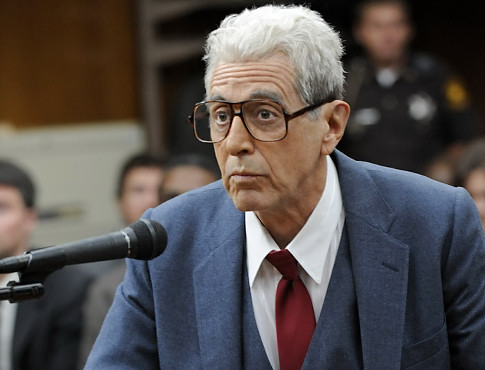 Made for HBO, Barry Levinson’s sympathetic telefilm casts an affable eye on a serious subject: the mission of Jack Kevorkian (a thoroughly de-glamorized Al Pacino). In the opening sequence, Kevorkian tells his long-suffering sister, Margo (Brenda Vaccaro, excellent), how hard he found it to watch their mother die a long and agonizing death. Convinced that the terminally ill deserve the right to die with dignity, he shares his beliefs with Jack (James Urbaniak), a Detroit journalist; Janet (Susan Sarandon), a Hemlock Society leader; and Neal (John Goodman), a medical supply salesman (the scenes of Neal and Jack playing poker recall Levinson’s Diner). Before he’s assisted a single patient, Kevorkian makes the national news, prompting Neal to quip, “You’re not a local quack anymore. You’re America’s quack.” Writer Adam Mazer profiles several of the 130 patients to take advantage of his “mercy machine,” starting with Janet Adkins, who suffered from Alzheimer’s disease. For protection, Jack acquires the services of attorney Geoffrey Fieger (Danny Huston), who supports him through evictions, lawsuits, jail time, and hunger strikes–until Kevorkian engineers his own downfall by defending himself. As with HBO’s Recount, Levinson adds archival footage at key points, such that Barbara Walters and others appear to play themselves. If he handles Jack’s quirks with humor, he always treats the afflicted with respect, and if Pacino’s accent skews more New York than Michigan, his pleasure in playing this strong-willed eccentric fuels Levinson’s finest directorial effort in ages. 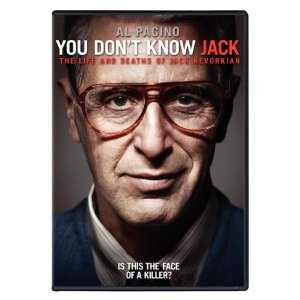 Once upon a time this film would have been released in theatres and this lead performance and maybe even Brenda Vaccaro’s would have been nominated for Academy Awards. That is how good this film is, award worthy, notable for it’s stellar execution and story, a standout for this year. Al Pacino’s Jack Kevorkian is not his best work in a decade, as some have speculated. It is his best work since Angels in America (from 2003), also an HBO produced and presented film. He is as commanding in that amazing series as in this. Pacino has always been physically gifted as an actor; adept at expressing his emotions with his back or his head, his hands or his walk. I think his reputation as actor has suffered in the last twenty years because he moved away from using his body (essential to the art of acting) and compensated with his voice. In this context, this film is a return to form: Donnie Brasco, Carlito’s Way, Glengarry Glen Ross, Scent of a Woman, Dick Tracy, to name his best work since 1990.

You Don’t Know Jack is an apt title for this film, because I was certainly aware of Jack Kevorkian growing up, knew he was an advocate and involved in euthanasia and that he went to prison, but I didn’t know he was such an iconoclast; morbid, graphic and unapologetic painter, a musician, a bachelor and a civil disobedient. These characteristics add to his legend, and his stature as a doctor who seems to have taken his profession and life’s work as something more than a path to prestige and wealth, which cannot be said of some doctors in truth and perhaps too many in reputation. The role of the physician in society is an aspect of the successful story told here.
The role of the politician and the collective social fears of death in our society are the other themes, and they too are well told.

Though Kevorkian is presented sympathetically, and his opponents are not; angry “Christians” in general and a politically vengeful D.A. specifically, it is ultimately his own folly that dooms him. This may speak to his bachelorhood, his unemployment at the outset of the film and his stubbornness at getting to the Supreme Court. But his ambitions are not clarified here, other than his humanism, which is made genuine in small moments as well as big.

I highly recommend this film. Al Pacino and Jack Kevorkian are in the center of it, and the other actors, particularly Vaccaro as his sister Margo, are excellent. Euthanasia is an issue brought to the forefront by Kevorkian, but his incarceration did not produce another advocate in his stead, and the issue has unfortunately fallen by the wayside. It is an important consideration, what power we have over ourselves when we are faced with imminent pain before our death. This film handles it incredibly well, and I hope it produces as much discussion and thought for you as it did for me.

Overall, I recommend watching this movie if you are interested in euthanasia and would like to learn more about Jack Kevorkian, but I’m warning you…you won’t learn much more than you already know..
Overall Rating: 9.5/10