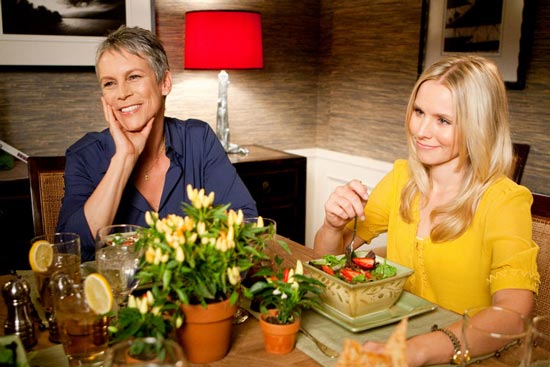 Contrary to the advertising campaign, You Again is not a laugh-a-minute comedy bursting with witty comebacks and flying food, but a slower-paced, at-times shallow drama about rivalries, second chances, and people’s ability to change. High school was a miserable time for Marni (Kristen Bell), but she’s overcome her past experiences and become a successful businesswoman. When her brother Will (James Wolk) announces his impending marriage, Marni is thrilled–at least until she learns that he’s marrying her old high-school nemesis Joanna (Odette Yustman). At first, Joanna pretends not to remember Marni, and it appears that she really has changed her ways and become a compassionate adult, but soon a darker truth begins to emerge and things start to get downright ugly. As fate would have it, Joanna’s aunt Ramona (Sigourney Weaver) turns out to be the old high-school best friend turned enemy of Marni’s mother Gail (Jamie Lee Curtis), and even Marni’s grandma Bunny (Betty White) encounters an old rival before the film is done. Despite each of the women’s desire to overcome past ill feelings, old wounds have festered and the reunions bring out the worst in everyone involved. Wedding planner Georgia (Kristin Chenoweth) is completely oblivious to everything but her own over-the-top agenda, while Marni’s dad/Gail’s husband Mark (Victor Garber) and groom Will quickly go from being clueless to completely perplexed by the women’s behavior. There are indeed amusing scenes in which the characters duel on the dance floor, throw plates and food, and have some unlucky encounters with an ant bed and a rickety tree house, but generally the film’s pace is too slow and the whole thing just feels strained and far-fetched. It’s too bad, because it’s a waste of talented actors. 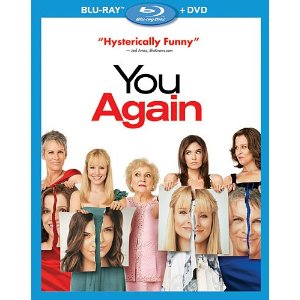 Those who hate each other at the beginning will forgive each other at the end. Those who try to deceive will have their deceptions unmasked. Those destined for love will find it, but not without an obligatory setback at the 66 percent point. If there is a party, it will go wrong. If there is a tree house, it will fall out of the tree. If it is necessary to improvise a wedding at a hospital, a ward will be cleared to make space for a wedding so elaborate it would look unlikely in a church. I hope they save pieces of the wedding cake for the patients whose beds have been wheeled out into the hallway.

The actors are plucky. They’re stuck in a movie that gives their characters not even a chance at a human characteristic. Benevolence, jealousy, resentment, charity, wisdom, disappointment and love are turned on and off like water faucets, often with only a few lines of motivation. Occupations are like name tags: Wise old dad is revealed as a “doctor,” mom runs a “bakery,” daughter in her 20s is “vice president of a national public relations firm,” brother is a “lawyer,” his fiancee is “working with the sick and underprivileged,” the fiancee’s mother “owns 14 hotels” and a private jet. None of these jobs figures in any way in the plot, except that the hotelier knows how to say three words in each of six languages. (She is played by Sigourney Weaver with such latent energy that I’m sure she would know more words if this movie were not rated PG.)

The heroine is Marni (Kristen Bell). In high school, she wore braces and glasses, was pimply and was called “Moo” because her initials were M.O.O. (Hint: Don’t use your middle name.) She is a blond, of course, and was bullied by a brunette, of course. This was Joanna (Odette Yustman), who has now morphed into Florence Nightingale. Her mother is Gail (Jamie Lee Curtis), and wouldn’t you know Gail went to high school with Joanna’s Aunt Ramona (Sigourney Weaver), and they — oh, never mind.

Marni’s grandmother Bunny is played by Betty White, who I urgently advise to start playing against type, because the standard 88-year-old Betty White, although one hell of a woman, has grown a tad over-familiar.
Movie Content: 7/10

The print is presented in 1080p/AVC MPEG-4 with a 2.35:1 aspect ratio. I found this print to be rather eye pleasing with vibrant colors. Fleshtones are very natural and accurate, considering that we see a few bare necessities throughout. Black levels are solid throughout. The image was also sharp with excellent details. The image is clean and pristine making this a very nice looking image.
Video Quality: 9/10

The audio is presented in DTS-HD MA lossless 7.1 mix. This film is a dialogue driven film. Dialogue was clean through the center channel with a nice degree of depth. I never had to raise or lower the volume to make out what was being said. The soundfield does get a few effects into play, but nothing major. The soundtrack takes advantage of the soundfield with audio also pouring through the rears.
Audio Quality: 9/5

Blu-ray CombPack (ALL DVD bonus, plus):

‘SAW VII’ to a degree left me disappointed as a longtime fan of the franchise. I felt like some questions were answered, while others were left open for almost another chapter. I am glad that the “SAW” franchise has finally come to an end. Fans of the franchise and of this film will want to pick up the Blu-ray which has a chock full of special features to go with excellent video and audio.
Overall Rating: 7/10