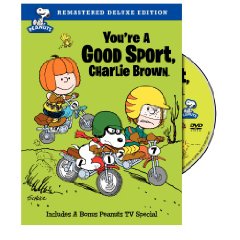 In the seventh Peanuts animated film, ‘You’re A Good Sport, Charlie Brown’; Warner Brothers releases the film in a Remastered Deluxe Edition. The remastering of this film is really fantastic for those that have seen this film over the years. This film is over 34 years old and clock in at 25 minutes long. While this is one of the lesser known of the Peanuts films, it won an Emmy Award.

This is a very nicely paced Charlie Brown film that everyone in the whole family can enjoy. That is one thing that makes the entire Charlie Brown franchise so great and accessible. ‘You’re A Good Sport, Charlie Brown’ does a great job trying to teach a lesson of being a good sport in competition for the younger kids. I have always found such wonderful meanings in these Charlie Brown films to really stand out on top.

The video and audio receive a much needed upgrade through a full restoration. While the film is 34 years old and only so much can be done, it does look good. Colors are much bolder than in the past.
Movie Content: 4.5/5

Another Story Featuring the Gang: You’re the Greatest, Charlie Brown – this is a bonus episode as Charlie Brown tries to win a decathalon.

Dust Yourself Off & Pick Yourself Up, Charlie Brown [New] – this featurette centers on Charles Schultze’s son Craig who inspired his father to make this film.
Special Features: 3.5/5

This is yet another excellent Peanuts release by Warner Brothers. The restoration on the video and audio benefits this older animated film greatly.
Overall Score: 4/5 (Purchase)