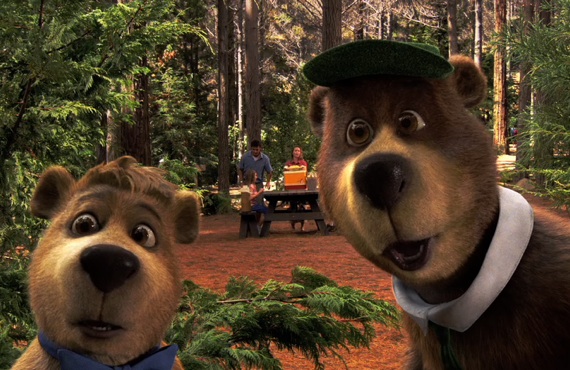 A blend of live action and computer animation, Yogi Bear is a lighthearted comedy featuring everyone’s favorite smarter-than-average bear, Yogi (Dan Aykroyd), and his pal Boo-Boo (Justin Timberlake). Ranger Smith (Tom Cavanagh) and his assistant Ranger Jones (T.J. Miller) are charged with keeping everything running smoothly in Jellystone Park, which basically translates into keeping Yogi’s obsession with stealing people’s picnic baskets under control and stocking the pamphlet stand. But when Mayor Brown (Andrew Daly) decides to close the park and rezone the land to allow widespread logging, Ranger Smith must find a way to make the park quickly turn a profit to stop the process and save the park from destruction. Documentary filmmaker Rachel (Anna Faris) happens to be in the park on a quest to film the unusual talking bear Yogi, so she and Ranger Smith team up and create a big centennial celebration that has the potential to save the park. Unfortunately, a crazy stunt by Yogi derails the celebration and destroys any chance of the park making a profit. The question is, was there sabotage involved and is there any other way to save the park? This film is packed full of crazy inventions, silly gags, high adventure, and slapstick comedy, and, while it’s really just fanciful entertainment, it does leave viewers with the message that you can’t fail if you never stop trying. 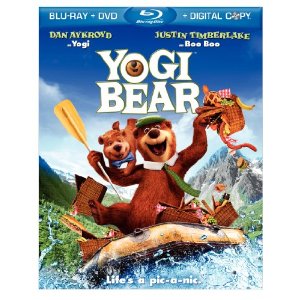 If Yogi Bear could ever have worked as a film, that time was around 1962 when the original The Yogi Bear show had just stopped producing new episodes. It wouldn’t have been a particularly polished film, but it would have stayed true to its roots in both tone, cast, and style. Daws Butler and Don Messick were the original bear duo and their voices in the roles are as iconic as the famous catchphrases; because of this, the announcement that Dan Aykroyd would take on the role of Yogi in the Yogi Bear movie and that he wouldn’t be studying Butler’s method put a lot of Hanna-Barbera traditionalists on edge.

Yogi and Boo Boo are terrorizing the campers and picnickers of Jellystone Park, whose well-being is looked after by Ranger Smith (Tom Cavanagh) and his hapless assistant, Ranger Jones (T.J. Miller). The Ranger’s job has never been easy, but he finds some relief in the arrival of zoologist Rachel (Anna Faris), who was attracted by the bearly duo’s weekly new schemes and contraptions to steal picnic baskets. Consequently, the park’s attendance has been down and after a disastrous attempt at raising funds and annual memberships is ruined by Yogi’s antics and Ranger Jones’s meddling, the Mayor (Andrew Daly) transfers Ranger Smith out and leaves Ranger Smith in charge. Unbeknownst to Ranger Smith, the Mayor plans on opening the park up for logging and it’s up to Yogi, Boo Boo, Rachel, and the Rangers to stop it all.

The story becomes a ridiculous, over-the-top contrivance that children will struggle to follow along with. The sense of humor, save for a few instances of slapstick, shoots safely over the heads of children and well beneath the level that will keep adults interested. The story is like a dozen that have come before it, safely infused with the new breed of environmentally conscious morals that are becoming increasingly common in children’s films. Sadly, no matter how hard the writers try to resuscitate the long-retired cartoon bear’s spirit, Yogi Bear lands with a deafening thud, devoid of any real imagination or sense of fun. This is what happens when a studio assembles a film from formula with no other intention than profit: it fizzles.
Movie Quality: 6/10

The print is presented in 1080p/AVC MPEG-4 with a 2:35:1 aspect ratio. I found the Colors to be very well done, yet I had an issue with the CGI not properly matching the print. This film looks like a cut and past job with the CGI Yogi and Boo Boo into the real world. I am not too sure if it has to do with a lower budget or not. Details are very good and there is depth to the image. The print is rather clean throughout without an blemishes.
Print Quality: 8/10

The audio is presented in a DTS-HD MA lossless 5.1 mix. This is a film where the soundtrack sounds very good taking advantage of the entire soundfield with the various songs played in the background. Bass is rather deep; there is a nice dynamic range of sound across all speakers. Dialogue is very clear and well balanced through the center channel.
Print Quality: 9/10

Yogi Bear the Movie is a good movie but not a great one.I would recommend people to see it,but only once. The jokes are kind of childish. The Movie is about Yogi Bear and Boo Boo trying to steal pic-a-nic baskets and they always fail. On Blu-ray this is a mixed bag between the decent video and audio that some what redeems this package in the AV department.
Overall Rating: 7/10