Posted in DVD Reviews by George Theofanopoulos on 16 September 2009 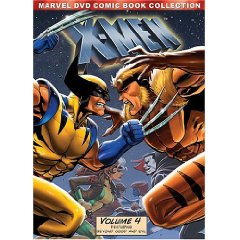 The X-Men are back for more nonstop thrills and excitement in Volume 3 of the definitive animated series. Faithfully created from the pages of the original Marvel comic books, these classic stories are a must have for any X-Men fan.

When the all powerful Dark Phoenix inhabits the body of Jean Grey, the X-Men go to battle in order to save one of their own. Get into the action with 15 spine-tingling episodes, including the 4-part Dark Phoenix saga in this collectible 2-disc set.

The action reaches all new heights in Volume 4 of the landmark X-Men animated series. With adventures adapted directly from the original marvel comic books, this colletion is a rich piece of the X-Men legacy and a must have for every X-Man fan.

X-Men must join forces with the heroes of the future whan Apocalypse, a mighty mutant, is driven completely mad by his powers. Discuver the stunning conclusion to the 4-part epic Beyond Good and Evil in this sensational 14-episode set.

After the release of Volumes 1 & 2 most fans were ecstatic to be able to own the first three and a half seasons of this classic animated series on studio released DVD. Luckily fans of this series will be able to collect more episodes this September 22nd with the further release of X-men: The Animated Series with Volumes 3 & 4. Volume three is confirmed to contain the following fifteen episodes from the third and fourth seasons of the show spread across two discs:

Disc 2
57 Have Yourself A Morlock Little Christmas
58 The Lotus and the Steel
59 Love in Vain
60 Secrets, Not Long Buried
61 Xavier Remembers
62 Family Ties

X-Men is something for all ages. Kid and teens will love the action and adventure, while adults will appreciate the well written episodes and how some of them follow the comics. And of course, everybody will appreciate the top-quality animation created by some of the greatest animation studios of the day and everyone will love the nicely drawn awesome looking characters who bear great resemblance to the X-Men of comic book artist Jim Lee and writer Chris Claremont.
Movie Quality: 9/10

We can now witness more adventure as episodes from season 3 and 4. X-Men closely followed some storylines from the comics.
Overall Rating: 9/10