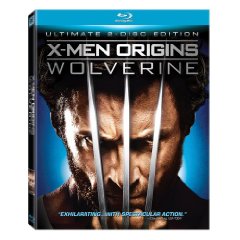 Wolverine, fan favorite of the X-Men universe in both comic books and film, gets his own movie vehicle with X-Men Origins: Wolverine, a tale that reaches way, way back into the hairy mutant’s story. Somewhere in the wilds of northwest Canada in the early 1800s, two boys grow up amid violence: half-brothers with very special powers. Eventually they will become the near-indestructible warriors (and victims of a super-secret government program) known as Wolverine and Sabretooth, played respectively by Hugh Jackman (returning to his role) and Liev Schreiber (new to the scene). It helps enormously to have Schreiber, an actor of brawny skills, as the showiest villain; the guy can put genuine menace into a vocal inflection or a shift of the eyes. Danny Huston is the sinister government operative whose experiments keep pullin’ Wolverine back in, Lynn Collins is the woman who shares a peaceful Canadian co-existence with our hero when he tries to drop out of the program, and Ryan Reynolds adds needed humor, at least for a while. The fast-paced early reels give an entertaining kick-off to the Wolverine saga, only to slow down when a proper plot must be put together–but isn’t that perpetually the problem with origin stories? And despite a cool setting, the grand finale is a little hemmed in by certain plot essentials that must be in place for the sequels, which may be why characters do nonsensical things. So, this one is fun while it lasts, if you’re not looking for a masterpiece, or an explanation for Wolverine’s facial grooming.

ugh Jackman’s fourth performance as Logan truly is “The Best There Is.” Whether it is because the movie’s purpose is to focus solely on Logan, or because Hugh has evolved as an actor, or because Hugh has grown closer to the character. Jackman captures the full emotional bandwidth of the character. The pathos, the irony. the overwhelming sense of loss that comes with over 100 years of life on the planet. Part of Logan’s appeal as a character has been that he is always seeking to become more than what he is. “Gifted” with “powers and abilities far beyond those of mortal men,” he sees himself as an animal “less than human.” A Samurai without a master, who sees himself as a “failed samurai,” etc… The movie, and Jackman’s naturally-enhanced physique and dramatic performance perfectly captures all of that ENERGY of the character.

Throughout the movie, Logan is surrounded by people who see either the “light” or the “dark” in him, and as such, the character is continually pulled in different directions, and tested, and as a result – grows. Whether it is the father who raised him – who sees the best in him, or later in life Kayla Silverfox, who acts as a guiding moral beacon to Logan, reminding him over and over that “he is not an animal.” They are (unfortunately) outnumbered by those who see the “dark” in him, including his mother, Victor and Stryker – the latter two who continually seek to exploit Logan’s dark side to fulfill their own purposes. And Logan himself finds out that focusing too much on his dark side usually results in him paying a price of some sort.

However, despite the deficient forthcomings that have emanated, things are properly adjusted, and X-Men Origins: Wolverine turns out to be a success as opposed to a disappointment that fizzles to the end. The movie gets back to its strong points, where we are entreated to a Wolverine and Sabretooth showdown, as well as romantic involvements concerning Wolverine that were never introduced in the previous X-Men releases..
Movie Quality: 9/10

The print is presented in 1080p/AVC MPEG-4 with a 2.35:1 aspect ratio. Colors are bright throughout the film, but do run warm in several scenes. Blacks are also very deep and strong with quite impressive details. The image is pristine as there isn’t a hint of film grain. Like I said earlier, this is one of those demo reference films that will make viewers drop their jaw to the floor.
Video Quality: 9.5/10

The audio is presented in DTS-HD MA lossless 5.1 mix. The audio is excellent receiving demo worthy praise. From the action to the dialogue scenes, I felt immersed the entire time. Bass is just perfect with the score and even adding that excellent punch with gun shots and explosions. The soundfield is engaging at all times pulling me in making this a very atmospheric experience. The rears encompass nice directional movement from speaker to speaker. Dialogue is very clean and crisp through the center channel.
Audio Quality: 9.5/10

While the special features are a bit on the skimpy side, I am happy to report that all features are in high definition. The audio commentaries are very entertaining and informative.
Special Features: 8.5/10

While ‘Wolverine’ deviates away from the origins of Wolverine from the comics, this was still a very entertaining film. Hugh Jackman finally nails the character very well with his performance. On Blu-ray, ‘Wolverine’ boasts excellent video and audio that will make one proud to own the format. This is highly recommended for fans of the ‘X-Men’ films and the Wolverine character if you can put it past that the film is not 100% accurate on Wolverine’s origins.
Overall Rating: 9/10