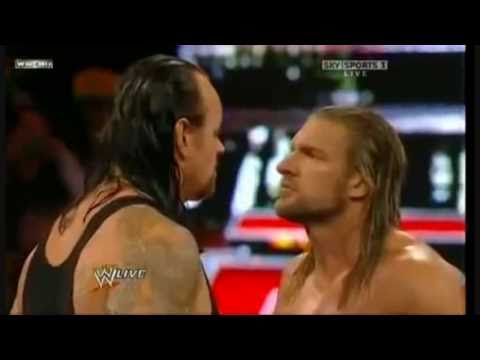 The biggest event of the year comes to the Atlanta when WrestleMania XXVII hits the Georgia Dome! Every member of the WWE Universe has eagerly anticipated WrestleMania and the biggest Superstars of WWE up their game when they perform on sports entertainment’s grandest stage. It s been a pop culture phenomenon for more than a quarter century it is WrestleMania.

Wrestlemania is the biggest event all year and this year was no exception. The return of the Rock added intrigue to a card in dire need of a boost. Would the show live up to it’s potential and deliver the best show of the year?

World Heavyweight Championship Match Edge (c) vs. Alberto Del Rio – Although I’m dissapointed that this one went on first, it was a great way to open the show and besides the Rumble, was a starmaking performance for Del Rio. Good, solid match and good final match of Edge’s illustrious career. 3.5/5

Cody Rhodes vs. Rey Mysterio: Probably one of the more underrated feuds and matches of Mania. Solid back and forth affair that made Cody look like a million bucks.

The Corre vs. Big Show, Kane, Santino Marella, and Kofi Kingston: To short to be anything significant, but while it lasted, it was a fun little sprint of a match.

CM Punk vs. Randy Orton: Punk is the best heel in WWE today. Orton bores me to death. Luckily both guys brought their working boots and produced a highly entertaining match with great psychology.

Stone Cold Steve Austin as Special Guest Referee
Michael Cole vs. Jerry Lawler: The biggest waste of space on the card. It should have been a 5-7 minute squash to make room for Daniel Bryan vs. Sheamus on the main show (which would have been good). Instead we were subjected to a long, drawn out, sloppy match that was overbooked to the hilt. Worse than Bret Hart vs. Vince McMahon from Mania 26. And the ending was the worst part, outside of the Spinaroonie moment.

No Holds Barred match
Triple H vs. The Undertaker: The most anticipated match of the night lived up to the hype. These 2 beat the heck out of each other for 30 minutes and left it all in the ring. While not on par with Michaels vs. Taker from Mania 25 or 26, these two delivered a slower paced, hard hitting, epic match that is a strong contender for Match of the Year. 4.5/5

Dolph Ziggler and LayCool vs. John Morrison, Trish Stratus, and Nicole “Snooki” Polizzi: Short and innoffensive, Trish Stratus and Michelle McCool carried the bulk of this match with Snooki hitting the spots that are most talked about. My only complaint was the lack of Morrison, Layla and Ziggler involvement. Other than that, they accomplished what I expected.

WWE Championship match:
The Miz (c) vs. John Cena The fact that the feud was more revolved around Cena and The Rock’s issues hurt the match and did Miz no favors, even though he has had a pretty good title reign and a very good heel champion. Outside of that, we got a solid but unspectacular main event that had some very creative booking on the finish and we still got to see the Rock lay the smackdown on both of the WWE’s biggest jabroni’s. Hopefully Rock vs. Cena at Mania 28 blows this out of the water.

The print is presented in 1080i/AVC  with a 1:78:1 aspect ratio. The WWE has never looked so good on television until it hit HD and now with more and more releases coming to Blu-ray from WWE. This is a vivid and colorful presentation all around showing off how good sports presentation can look on home video. Having watched the DVD version and now the Blu-ray, there are no artifacts or compression as present on the DVD version.
Print Quality: 9/10

Overall the booking is in serious question. Plus the Rock opens the show and cuts a promo for 15 minutes & you dump The United States Championship off the card so the Rock can talk?? He pretty much said the same thing he has been saying for the last month. I was very disappointed in this years WrestleMania. Hopefully they learn from their mistakes this year & WrestleMania XXVII in Miami will be a lot better!!
Overall Rating: 7/10

« The Glades The Complete Season One on DVD June 14, 2011
The Usual Suspects (Digibook) Blu-ray Review »