Posted in DVD Reviews by George Theofanopoulos on 27 September 2011

Its the biggest event of the Summer, and it continues to shine in Hollywood! The WWE Universe will be watching as the Superstars of World Wrestling Entertainment bring SummerSlam to the Staples Center. Last years show saw WWE and World Heavyweight Championship Matches and a 7-on-7 battle pitting the best of Raw against the upstart Nexus. Who knows who the superstars of Raw and SmackDown will top themselves? 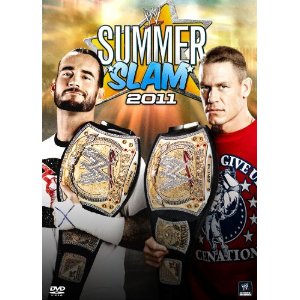 Rey Mysterio, Kofi Kingston, John Morrison vs. The Miz, Alberto Del Rio, R-Truth – Each member of one team had a personal issue with a member of the other team & even fought in singles matches in the previous weeks leading up to this six man tag. This was a very fun opening match that was fast paced & full of non-stop action featuring a bunch of high flying from the babyface team while R-Truth pulled out some of his old athletic moves, Alberto sneaking in his shots, and Miz even pulling out a modified face first DDT that looked like it really hurt.

Sheamus vs. Mark Henry – Mark Henry showed that he had the power advantage early by beating on Sheamus followed by tossing him over the top rope & pressing him back into the ring before focusing on his back with a backbreaker & various splashes. Sheamus tried fighting strength on strength against Henry with a shoulder block from the top rope along with delivering the crow kick that knocked Henry out of the ring but Mark continued to use his strength that including ramming Sheamus into the post on the outside before crashing through the ringside barricade. This was one of those matches that was solid & kept both men strong as Sheamus brought the fight while Mark was still showcased as strong & dominate.

WWE Divas Champion Kelly Kelly vs. Beth Phoenix – Eve was in Kelly’s corner while Beth had Natayla in her corner as they recently re-formed their alliance under the name “Divas Of Doom.” Kelly used her athleticism early to get the best of Beth such as a head scissors & a dive off the top onto the floor. Beth rebounded with her power such a pressing & hanging Kelly on the top rope along with the back breaker with Kelly just refusing to lie down & keep fighting. By diva match standards, this was nice & the best divas match on PPV in quite sometime.

Daniel Bryan vs. Wade Barrett – As the commentators noted, it was only around a year ago that these men were both rookies on the first season of NXT along with later being members of Nexus while it was last year at SummerSlam that Bryan was the mystery member of Team WWE competing against Barrett’s Nexus in the main event. Bryan worked over Barrett’s legs with various stretches & kicks while also pulling out various moves like the missile dropkick & running knee strike off the apron. Both men traded momentum back & forth against each other including moments like Bryan delivering a flying clothesline only for Barrett to return it later with a flying forearm. This was another good match as it was the performance that Barrett has needed after his long running losing streak.

No Holds Barred Match: World Champion Christian vs. Randy Orton – Before the match, we get a special treat as Edge returned to confront Christian about his actions over the previous weeks. Christian was in control early but tried to run away when Orton regained the advantage only for Orton to chase him into the crowd & dish out punishment there. The fans had dueling chants as a kendo stick came into play causing Orton to bleed from the mouth before he caught Christian in mid-air with a dropkick. Orton pulled out & setup tables which Christian was superplexed onto one that was laid out on the ringmat. They exchanged their signature moves with Orton delivering an RKO though the announce table while Christian delivering a Killswitch in the ring but it was when Christian once again showed the ultimate sign of disrespect that sent Orton’s anger into overdrive involving a chair, trash can, table, and the steel steps. This match ranks right up there with their first two matches in this series as a high quality encounter as Christian was able to pull more out of Orton than most were able to do.

WWE Champion John Cena vs. WWE Champion C.M. Punk w/Triple H as the special referee – Cena was in control right off the bat grounding Punk with various takedowns & headlocks while Punk attempted maneuvers like a body scissors only for Cena to power out & reverse into a side slam. Both men were being able to counter & reverse each others signature holds like Cena’s comeback with shoulderblocks being stopped by Punk’s high knee & a series started by a submission attempt by Punk reversed into an STF countered by a keylock & turned into a crossface. Triple H as a referee didn’t really start to play a factor until later on as there was a moment where he took matters into his own hands to make sure the match didn’t end in a draw with both men later questioning his count after each hit one of their signature moves only for the other to kick out of it. They pulled out all the stops here & even did things out of their normal move set like Cena’s dropkick & Punk doing a move that got a chant of “Thank You Savage” from the crowd. This was just like their match the previous month where Cena stepped his game up & put on a performance while Punk showcased why he was one of the best in the WWE but stay tuned after the match as we got a few surprise appearances leading to something happening that nobody expected when the match started.

In the end, this event is much better than the previous year as it was a solid show from top to bottom as there wasn’t a bad match on here & we got some of the best performances from the talents involved in recent months or even longer so this is a show worth going out of your way to see.