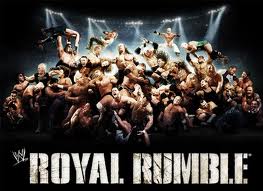 It’s the dream of every superstar to headline WrestleMania. For one man out of 40, the dream becomes reality at the Royal Rumble. Whoever outlasts 29 other competitors earns himself a championship match at WrestleMania 26. The superstars of Raw and Smackdown, including past winners Randy Orton, John Cena, Edge, and Rey Mysterio, and superstars looking to add this win to their resume, including Wade Barrett, Kane, Kofi Kingston, Sheamus, John Morrison, The Miz, Mark Henry (and more) will do everything to overpower and outlast the competition as the Road to WrestleMania 27 begins at the Royal Rumble. 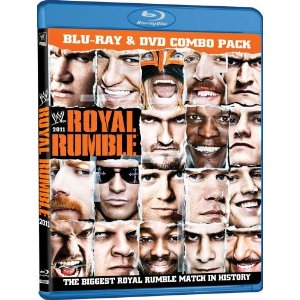 The 40 Man Royal Rumble was one of the better rumble matches, from begining to end, in recent memory. If you get the DVD, this will almost certainly be the only match you ever watch more than once. The two opening championship matches served as a showcase for why ratings are in the septic tank. Each championship match went close to half an hour, with both feeling like they lasted for several days apiece. The Edge/Ziggler match was the better of the two, but it only picked up after the first painfully sluggish 20 minutes (what a way to hype up a crowd & start off a ppv!), largely because people do not care about Ziggler that much, and Edge looked as if he hadn’t seen the inside of a gym since Bush was in office. They picked up the pace to try and save it, but too little, (far) too late.

World Heavyweight Championship
Edge (c) vs. Dolph Ziggler
Now this is how you open a show! I was expecting nothing less than a good match from these two, and we got a great one. Edge & Ziggler mixed very well in this one. I really liked the involvement of Vickie Guerrero, mainly because it showed you how the odds were heavily stacked against Edge. Of course, Edge eventually found a loophole and even pulled out the Killswitch, which was interesting because it is a move from his former tag team partner Christian’s repertoire. So to sum this up, this was one of Edge’s best title defenses and arguably Ziggler’s best match in his career so far.

WWE Championship
The Miz (c) vs. Randy Orton
Unfortunately, lightning strikes twice in a bad way for the WWE title matches at the rumble. Last years Orton/Sheamus match was unimpressive, as was this one. I wasn’t disappointed with this match by any means, basically because I wasn’t expecting much. It was very similar to any other encounter they have had, Orton dominates, then Riley interferes to help Miz, then Orton dominates again. It was a boring and repetitive pattern. One thing I will praise about this match, was the ending involving CM Punk & Nexus. Maybe Punk has held a grudge against Orton this whole time? Anyway, while I was a big fan of the ending, the match was decent, but nothing special.

Fatal 4 Way for the Divas Championship
Natalya (c) vs. Michelle McCool vs. Layla vs. Eve Torres
Well folks, this one came out of nowhere. As expected, the Divas couldn’t ride the wave of momentum that carried from the near great tables match up back at “TLC”. This one was just another disappointment, especially at the fact Natalya lost the belt.

40 Man Royal Rumble – WWE added a different element to the Rumble this year in that they added 10 more participants to make this the biggest Rumble of all time with 40 men. As usual, there were plenty of highlights here…the fight between the New Nexus & The Corre, Daniel Bryan & C.M. Punk starting out with references to them being no strangers to each other with their past in the “minor leagues”, Morrison showcasing his par-kor ability, Chavo Guerrero having his moment, the domination of the New Nexus including the confrontation between the returning Great Khali & Mason Ryan, the return of Booker T…SUCKA!, John Cena going after Nexus, Hornswoggle (I couldn’t stop laughing), Kevin Nash returning as Diesel & his stare-down with Big Show (not to mention Striker’s reaction to it), Alberto Del Rio’s entrance, the reaction (or lack of it) for the Cena/Orton showdowns, the shocking elimination of John Cena, and the battle between the final two. This was a very entertaining Rumble.

The print is presented in 1080p/AVC MPEG-4 with a 1:78:1 aspect ratio. The WWE has never looked so good on television until it hit HD and now with more and more releases coming to Blu-ray from WWE.  This is a vivid and colorful presentation all around showing off how good sports presentation can look on home video. Having watched the DVD version and now the Blu-ray, there are no artifacts or compression as present on the DVD version.
Print Quality: 9/10

The 2011 Royal Rumble was very entertaining with the addition of the 10 men this year making this a 40 man Royal Rumble. The under card was good with Edge vs. Ziggler being the match of the night. If you have not seen the 2011 Royal Rumble, you owe it to yourself to view this on Blu-ray.
Overall Rating: 8.5/10