Posted in DVD Reviews by George Theofanopoulos on 01 August 2011 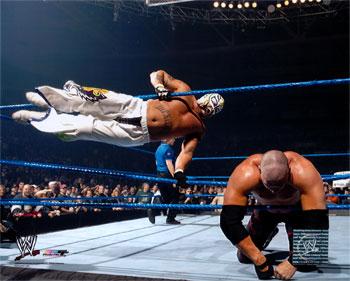 For the first time ever, Rey Mysterio sits down and reviews his historic career, reflecting on his greatest matches and moments. This all-new interview features exclusive and candid comments from the Ultimate Underdog on his Sports Entertainment path through ECW, WCW, and WWE; his rivalries with Eddie Guerrero, Chris Jericho, CM Punk; his thoughts on battling men almost twice his size, and his emotional Cruiserweight, Intercontinental, and World Championship runs. 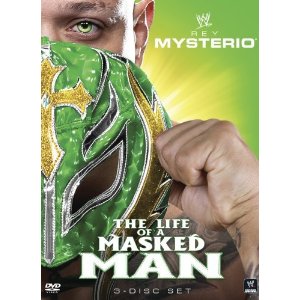 When I heard this DVD was going to feature a sit down interview with Rey Mysterio discussing his career (similar to Shawn Michaels in his WWE: Shawn Michaels – My Journey DVD). I hoped the interview would be good, but it far exceeded my expectations. This may be the WWE’s best interview they’ve ever produced for a DVD. Rey openly discusses
his career. You’ll hear insider information like what Rey’s masks and tattoos mean, how he developed a friendship with the legendary Mil Mascaras, his induction into the AAA Hall of Fame, his time in AAA & CMLL, his ECW experience and what it meant to his career, favorite matches and opponents, the legacy of the mask in lucha libre and tons more!

Matt Stryker is the host and he does an excellent job interviewing Rey. Their conversation sounds like two old friends just kicking back and reminiscing. I have just two small complaints with the interview, they ignored the fact that Rey lost his mask in WCW and there were a few times when the interview turned kayfabe (when Rey talks about his feud with Kane for instance). Those two flaws aside, the interview is easily the main reason to pick this one up.

The Creation of the Mask

Who’s That Jumpin’ Out the Sky?

On Top of the World

Mysterio’s Opportunity for a World Heavyweight Championship Match at WrestleMania 22 is on the Line
Rey Mysterio vs. Randy Orton
No Way Out 19th February, 2006

Putting the Mask on the Line

The Art of Mysterio

Overall, if your a casual fan of Rey, I would recommend starting off with WWE – Rey Mysterio 619 or WWE: Rey Mysterio – The Biggest Little Man since those DVDs contain his best matches and just skipping this one. However, if you’re a fan of Rey’s this is a must buy for the interview segments and the handful of must-see matches.