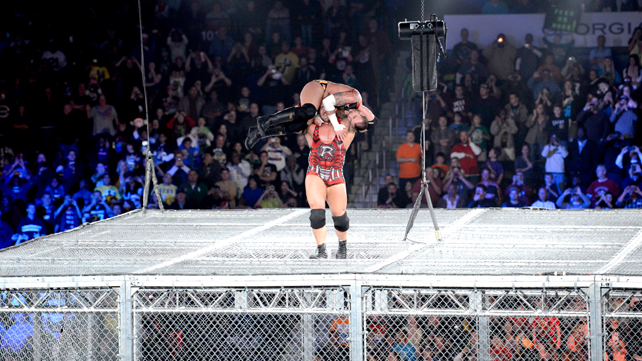 The Superstars of WWE will be surrounded by an unforgiving steel prison in a night where the only way to emerge as a World Champion is to inflict and endure career-altering punishment. It is a match so brutal that only eleven men in the history of WWE have claimed victory and even fewer have summoned the strength to walk away on their own. Now an annual fall tradition who if any will add their name to this illustrious list? Fierce rivals collide and flesh meets steel as WWE presents Hell in a Cell 2012. 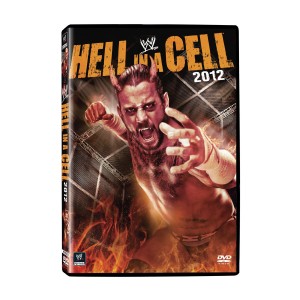 Randy Orton vs. Alberto Del Rio – Orton took the fight to Del Rio right off the bat as within the first minute, he was bouncing his head off the announce table & throwing him into the ringpost before Rel Rio was able to use his momentum against him to gain an advantage. Del Rio heavily focused on Orton’s arm & was relentless in pulling on it with various armbars including one where he hung himself off the ropes while also countering Orton’s attempt at a powerslam into the cross armbreaker. It was when Del Rio got over confident & mock Orton that he was able to regain control as they traded momentum throughout the rest of the match countering each others signature holds with a finish that literally came out of nowhere. This was a great opening match that went back & forth between both men.

Tag Team Champions Team Hell No (Kane & Daniel Bryan) vs. Team Rhodes Scholars (Cody Rhodes & Damien Sandow) – Team Hell No singled out Cody early with Bryan working over Cody’s arm including just stomping on it before Rhodes & Sandow attempted to work over Kane by taking his leg out but to no avail as Bryan regained the momentum for his team with heavy kicks & a suicide dive. Rhodes Scholars used a distraction to turn things in their favor singling out & working over Bryan this time before Kane was eventually able to get the tag but things started to fall apart with too many miscommunications between Team Hell No resulted in Kane losing his cool. The match was your basic tag team match but nothing special as it just continued the storyline of dysfunctional partners in Team Hell No while with a finish (that really just fell flat on everyone) that left room for a rematch.

Intercontinental Champion Kofi Kingston vs. The Miz – With both men facing off on back to back shows weeks earlier, they knew each other very well which we saw in the opening moments as they avoided the others signatures moves before the match was eventually taken to the outside where Kofi was able to avoid being thrown into the steel steps only for Miz to nail him with a running big boot. Miz slowed the pace down & grounded Kofi to take him off his game with Kofi being able to recover & going into a series of reversals between the S.O.S. & Skull Crushing Finale before Miz once again regained the momentum & even doing a knee buster & exposing that leg that was effective as he was relentless pulling Kofi off the top rope via his leg along with submissions like the half crab. This match had good exchanges between the two resulting in a nice match but not better than their previous match on TV weeks earlier.

United States Champion Antonio Cesaro vs. Justin Gabriel – Cesaro attacked right at the bell with some early wrestling before he was able to dominate with various holds like a fall away slam, double stomp, and armbar. Gabriel fought back with a springboard moonsault & later two separate DDT’s out of the corner but Cesaro still brought a fight including a clothesline that turned Gabriel inside out & later catching him in the middle of a springboard on the outside with an uppercut. An average match but nothing special.

Rey Mysterio & Sin Cara vs. Primetime Players – A rematch from the Tag Team Title Tournament earlier in the month as Rey & Cara started out in control using some double teaming moves but PTP was able to catch Rey in the middle of a 619 attempt working him over before the hot tag was made to Sin Cara who worked them over with kicks & a flying crossbody but got caught himself. PTP grounded Cara with moves like a body scissors & chinlock combination along with an abdominal stretch with Cara able to finally get some offense in including a standing version of the Slice Bread #2 that landed himself directly on his head. This was like the previous tag match where it was the basic tag team formula that resulted in an average encounter.

World Champion Sheamus vs. Big Show – Show came out dominate causing Sheamus to attempt to chop him down with a shoulderblock to the knee followed by other shoulderblocks before Show caught him & punished Sheamus just beating him down in the ring with hard chops in the corner to the point where you saw blisters on Sheamus’ chest. Show took the match to the outside where he threw Sheamus so hard over the announce table that Jim Ross almost got taken out in the process before taking the match back in the ring & worked him over very slowly with moves like the bear hug while always catching Sheamus whenever he tried to build some offense like kicking off the Texas Cloverleaf so hard that it sent Sheamus to the outside. Things started to pick up towards the end with Sheamus finally able to hit some heavy blows against Show that took him down before both men kept hitting signature moves that have normally won them matches in the past only for both men to keep kicking out. They attempted to tell the story of Sheamus being “out of his element” as he’s facing someone more powerful than he is but Show’s domination during a majority of the match was just too slow of a pace & went on for too long that it took a while to get into the comeback by Sheamus.

Divas Champion Eve vs. Layla vs. Kaitlyn – With both divas having issues with Eve dating back to the previous PPV, she was the odd woman out as both girls targeted her individually & double teamed her before it became every woman for herself when one tried to steal a pin & even both girls trying to pin Eve at the same time before they went at it with a series of back to back near falls. Eve was able to get things going in her way focusing on Kaitlyn’s previously injured ankle including various submissions like a grounded anklelock as Layla was able to get involved in the action resulting in a face to face battle in a position that J.R. didn’t know how to call before Kaitlyn was able to showcase her abilities from here with an attempt as a submission of her own along with some strength of her own with a gutbuster off her shoulders & a over the shoulder slam. All three girls worked hard here & it showed as I was impressed with all the various submissions throughout the match while Kaitlyn showed that she had some strength with the only problem being that they were just in a bad spot on the card.

Hell In A Cell Match: WWE Champion C.M. Punk vs. Ryback – Punk tried avoiding Ryback but was eventually caught as Ryback dominated tossing Punk into the cage multiple times that hurt Punk’s arm causing Punk to resort to tactics like using a fire extinguisher from under the ring to temporary blind Ryback before he made Punk pay for that with a punch that went through a steel chair. Ryback continued to overpower Punk causing Punk to go aerial with a few blows off the top rope & even a suicide dive to the outside that only hurt his arm even more but kept his advantage by using Ryback’s momentum against him such as moving out of the way of his charge towards the steps while also bring a kendo stick into the match before the another man involved in this match made the difference with an aftermath that can be defined by the phrase “you may have won the battle but you lost the war.” WWE put themselves into a no win situation here (another story for another time) with Cena being injured as they had to keep their current version of Ultimate Warrior/Goldberg strong while still keeping the title on Punk and the added stipulation of Hell In A Cell didn’t leave much room for anything other finish as they had to have a winner in this match resulting in a match that was on the level of Undertaker/Big Boss Man where it was easily forgettable once it was over & didn’t live up to the standards this type of match.

There wasn’t anything that really stood out or have a heavy replay value on this show with one of the problems being that with WWE having up to 7 hours of television a week resulted in some of these matches already happening on free TV (Mysterio & Cara/PTP) with some being even taking place twice within the last month (Cesaro/Gabriel & Kofi/Miz). Combine that with the issues with the main event title matches I’ve stated earlier then this is just one PPV that I would rank as above average overall.
Overall Rating: 7/10