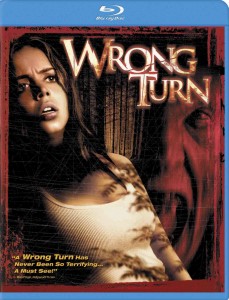 Sultry Eliza Dushku runs for her life in a snug white tanktop, pursued by inbred backwoods cannibals in Wrong Turn. Dushku (Bring It On, Buffy the Vampire Slayer) and a clump of other attractive young people (including Six Feet Under’s Jeremy Sisto and Desmond Harrington of We Were Soldiers) get waylaid in the deep West Virginia wilds by a trio of grotesque mountain men, all given realistic ugliness by makeup artist Stan Winston (Interview with the Vampire, Terminator 2). Wrong Turn is the sort of movie where you know who’s going to die by the order they appear in the credits, but fans of the inbred backwoods cannibals genre (The Texas Chainsaw Massacre, The Hills Have Eyes) will find much to savor, particularly the scene in which Dushku and Harrington are trapped under a squalid bed while the inbred backwoods cannibals prepare one of their friends for dinner.

This excellent little slasher film starring Eliza Dushku and Desmond Harrington harps back to such classics of the backwoods slasher genre as The Texas Chain Saw Massacre, Last House on the Left and The Hills Have Eyes. The story is simple: Five friends are driving along a road when their jeep crashes into the car of another man. The group go to look for help and find an old building. However, things soon take a sinister turn and they realise that the car crash might have been the least of their worries after all.

This film is particulary gory and for this reason, gorehounds will not be disappointed. The special prosthetic make-up effects were created by the Stan Winston Studio – the company that created the effects in all three Terminator films as well as in the Jurassic Park films – and are one of the most fascinating parts of the film. The production standards are very high in general as is the acting of the whole cast. Unlike in many other slasher films, the audience actually cares for the characters created here and root for them.

These mutants are twisted. Their actions are as repulsive as they are unexplained. Stan Winston does a wonderful job of creating mutants that are not so freakish as to be ridiculous, but that are unsettling enough to make you cringe. You will very quickly despise these mutant characters for their lack of reason and unquenchable thirst for innocent blood.

The movie achieves a good level of suspense, with some good scares and a few nasty scenes. I will say that it turned out to be better than I was expecting it to be and for anyone who enjoyed “The Hills Have Eyes” or “The Texas Chainsaw Massacre” (not that this movie actually compares to TCM), you should at least check this movie out.
Movie Quality: 9/10

The print is presented in 1080p/AVC MPEG-4 with a 1.85:1 aspect ratio. The picture quality is a mixed bag with ‘Wrong Turn’ on Blu-ray. There are times where the print looks very good and others where it just looks drab. Colors are presented well, but do not always have true pop to them. In the scenes that falter colors have a bit of a washed out look in them at times. Blacks are deep. It also affects details at times, where the image can appear out of focus and then there are scenes where you get a very detailed scene that looks good. There is subtle film noise throughout the print, but it becomes distracting. This appears like an above average upconverted DVD which is a real shame.
Video Quality: 5/10

The audio is presented in DTS-HD MA lossless 5.1 mix. I was very impressed as to how dynamic sound effects were presented in the soundfield. There are plenty of panning effects that will catch the viewer’s attention almost immediately. While this film does have its aggressive audio for effects and soundtrack, dialogue is also excellent. Dialogue is channeled through the center with no apparent issues as the audio was clean and crisp.
Audio Quality: 9/10

All special features are presented in standard definition which is a shame as this would have been a great opportunity for these features to be in high definition. I guess when the image does not get the much needed upgrade, I can’t expect the same from the special features.
Special Features: 7/10

‘Wrong Turn’ receives a lot of flak as either being a ‘Texas Chainsaw Massacre’ or ‘Hills Have Eyes’ rip off. I found this film to be much more than that with good acting and a rather interesting story. On Blu-ray I found the image quality to be lackluster, but the audio is excellent for a catalog title. If you are looking to upgrade your DVD to the Blu-ray version, I have a hard time making this recommendation based on the image quality lacking.
Overall Rating: 7.5/10