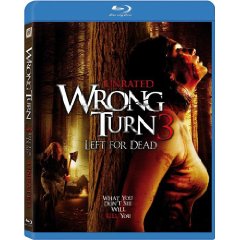 College student Alex and her friends go to the woods on a rafting trip. Soon after, her friends are killed by the mutant cannibal, “Three Finger” that survived from the previous film. She is left to fend for herself, but not for long. Meanwhile some dangerous prisoners are being transferred by Nate Wilson, a prison guard, on his last day before leaving to become a lawyer. During transport their transport bus is attacked by Three Finger and the prisoners escape.[2] While being chased through the woods, the prisoners and Nate encounter Alex and an abandoned transport filled with money. The money becomes the prisoners sole motivation for escape and survival. However, One-by-one Three Finger hunts and kills all the prisoners except Brandon with Nate and Alex surviving. At the end, Nate returns to take the money that was left behind, but Brandon kills him and an unknown figure kills Brandon as he collects the money.

None of the creative team, writers or directors, return for Wrong Turn 3, but that shouldn’t be a negative sign due to the fact that that was the case with the fist sequel. Fox lets newcomers take a stab at their franchise and hope for the best. Well, this time they lost the hand. Director Declan O’brien isn’t a first timer either when it comes to genre material. He’s a veteran of Sy-Fy.

The first ‘Wrong Turn’ came out in the time when horror was just getting revitalized with the’ Saw’ films and a slew of successful remakes like ‘The Texas Chainsaw Massacre’ and ‘Dawn of the Dead’. It also was part of the time’s trend in that it was a non-self-referential horror film that also was paying homage to the type of horror that was vogue in the mid to late 70’s. ‘The Texas Chainsaw’ remake and ‘Rob Zombie’s House of 1,000 Corpses’ were also part of this wave. The sequel ‘Wrong Turn 2’ would be released several years later. While the sequel was enjoyable and entertaining, there was also a problem with some bad acting mixed into the fray. The crazy cannibals did not meet their demise as we had thought, one of them survived. It was the looney with the three fingers.

The setup for the direct to video third film in the series involves prisoners being transported across state. The lead prisoner Chavez, is crazy and only cares about himself and how he can escape this horrible night. Then add several prisoners that survive, a few guards, and a surviving teen from the opening scene rack massacre. They try to make it out of the woods before the crazy cannibals end up killing them.

I thought this film did start out a bit slow with the first 15-20 minutes where it took time for things to start moving. Then things started moving at a better pace keeping things interesting. I didn’t have a problem with the film again till the ending, which had my head shaking a bit. Depending on how successful this film becomes, I can see FOX releasing a fourth film in this series as it seems they might have struck gold considering that the second film did so well. I will say for a lower budgeted film than the second one, make-up and effects including the acting were very well done. You will not be disappointed in the gore department or some of the cheesy acting.
Movie Quality: 8/10

The print is presented in 1080p/AVC MPEG-4 with a 1.78:1 aspect ratio. I was not impressed with the picture quality of the first ‘Wrong Turn’ or even ‘Wrong Turn 2’ on Blu-ray. They had a very soft and muddy looking image with very low amounts of detail. Things are different here with ‘Wrong Turn 3’ as this is a much more colorful film when the scenes allow for it since this is a much more darker film than the past two. Black levels are deep and consistent. Details are consistent without any apparent issues. Overall this was a much better print than the previous two releases.
Video Quality: 9/10

The audio is presented in DTS-HD MA lossless 5.1 mix. The rears almost always have some kind of effects. I felt like I was at the center of the action in many of the sequences with bullets whizzing by behind me or the sound of ‘Three Finger’ stalking his victims. Bass is also on the low end of the spectrum, and it sounds good. It adds that extra oomph to scenes with guns blazing, vehicles, and the ongoing chaos. Dialogue is very good through the center channel.
Audio Quality: 9/10

‘Wrong Turn 3’ started off slow for me and then as the film progressed it was actually entertaining until the ending kind of made me feel a bit blah. If you are a fan of the first two films, I highly recommend picking this up to complete your collection or even to view. On Blu-ray this package offers better video and audio than the previous two efforts in high definition. The special features are lacking here with a few featurettes and deleted scenes that are only a few minutes long. If you can look past through some of these mishaps, you will find a decent horror film.
Overall Rating: 8/10