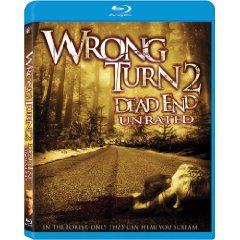 By adding the Japanese cult movie Battle Royale to Wrong Turn’s cinematic puree of Deliverance and The Hills Have Eyes, Wrong Turn 2 primes itself for some clever spins on the repetitive inbred-mutant-humans-hunt-and-eat-sexy-young-people genre. A pseudo-post-apocalypse Survivor-type game show brings five sexy young people (a bitchy vegan, a loudmouth skateboarder, a lesbian marine, a straight-laced jock, and a slutty…uh…apparently, she’s just a slut) to the Appalachian woods, where inbred mutant humans start picking them and the TV crew off. Also along for the ride is the tough-as-nails host (Henry Rollins, Bad Boys II), who goes native and starts hunting the inbred mutant humans. Regrettably, the game plotline is soon tossed aside and the movie settles into a straightforward hunt-kill-eat scenario. But for fans of the genre, Wrong Turn 2 does a good job: The sequence of deaths is not entirely predictable and you get to see one pair of exposed breasts, two sets of exposed intestines, and literal barrels of gore. Featuring horror flick stars Erica Leerhsen (the remake of The Texas Chainsaw Massacre), Crystal Lowe (Black Christmas), Texas Battle (Final Destination 3), Daniella Alonso (The Hills Have Eyes II), D-list celebrity hostess Kimberly Caldwell, and Aleksa Palladino (who once had a promising career in decent indie movies like Manny & Lo, The Adventures of Sebastian Cole, and Storytelling).

‘Wrong Turn 2’ is quite different from the original in several ways. The sequel to the more atmospheric than the original ‘Wrong Turn’ which relies much more on action and gore. This is a largely gory flick folks. If you seek gore and guts in your horror movies, look no further. Truth be told, I had a blast watching this, and I like it a lot more than the original.

‘Wrong Turn 2’ most certainly delivers on the action and death scenes. Many of which actually disturbed me a bit, and that hardly ever happens. The film is twisted! This makes the original look like a PG-13 film. You can tell the makers of this film had a blast and really tried to put the best on screen as they could. The death scenes were pretty creative and convincing. Many of which are wild and I was shocked with a few. Very cool and twisted stuff.

I don’t have any real complaints about the special effects brought to bear here – there’s one explosive death that’s truly impressive, and the whole film is pretty much blood-stained. The hillbillies, of course, all look as ugly as homemade sin. The film doesn’t boast a lot of character development, but it does give us a rare treat in the form of potential victims who all try to escape rather than stupidly walking into their own gruesome deaths.
Movie Quality: 9/10

The print is presented in 1080p/AVC MPEG-4 with a 1.78:1 aspect ratio. I was not impressed with the picture quality of the first ‘Wrong Turn’ on Blu-ray. It had a very soft and muddy looking image with very low amounts of detail. The same problems persist with the sequel, except there are many more scenes that actually have better details than the original. It is rather odd that a film that is only 2 years old, it would not look much better than this offering. Black levels are deep and consistent. Overall I was not impressed with this print.
Video Quality: 6/10

The audio is presented in DTS-HD MA lossless 5.1 mix. While I find the new mix to be a nice added bonus since there is a bit more going on due to the sound effects, this was also underwhelming at times. There wasn’t enough activity in the surrounds when compared to the original release. While I was thinking that this had to do with the film being a direct to DVD, not what I expected. Dialogue comes through the center channel rather clear.
Audio Quality: 8/10

‘Wrong Turn 2’ is a twisted ride which is different from the original film. If you enjoyed the original ‘Wrong Turn’, then the sequel will not disappoint. I was underwhelmed by the audio and video of this Blu-ray release considering that the film is only 2 years old. If you are a fan of the original, you should not pass up this sequel as it is entertaining from start to finish.
Overall Rating: 8/10