Without A Paddle Blu-ray Review 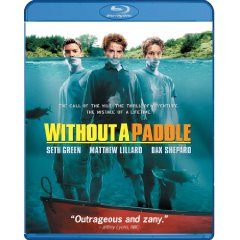 To honor a childhood oath, three friends (Seth Green from Austin Powers and Party Monster, Matthew Lillard from SLC Punk and Scooby Doo, and newcomer Dax Shepard) head into the Oregon wilderness in search of lost treasure. After grappling with a bear, whitewater rapids, backwoods psychopaths, beautiful eco-terrorists, homophobia, and a very hairy Burt Reynolds, the boys face their fears and learn valuable life lessons about treasuring friendship and stuff. Dude, it’s totally, like, Deliverance for the Gen-Y slacker set! Admittedly, it falls a bit short as a meditation on masculinity, but teen audiences will find plenty to enjoy. The interplay among Green, Lillard, and Shepard has a rambunctious enthusiasm that overcomes the predictability of the script.

Three guys who were friends in school, kinda lose contact afterwards, get together after their fourth friend dies. They go on a treasure hunt that their friend sends them from beyond the grave. Heard this story before? You certainly will have. This is more of a guys movie, particularly with all the stunts. There’s a very scary scene featuring a lot of water, and a little canoe which you could probably break in half over your knee. Thankfully it’s not your typical road trip movie either, with plenty of little twists thrown their way.

When I first watched ‘Without A Paddle’, I didn’t think I was going to like it. I like Matthew Lillard and Seth Green, but wasn’t a big fan of Dax Shepard. The plot didn’t sound all that good to me and I was concerned with some of the content warnings. Surprisingly, ‘Without A Paddle’ wasn’t too bad of a movie. Yes, there is pot smoking done for comic affect. Yes, there is sexual innuendo. Yes, there are a lot of crude jokes. And yes, once the movie gets started much of it is nonsensical and seems like something out of a Benny Hill sketch or a Monty Python movie. But, this was decent and much better than the sequel. It made me laugh during some scenes, but there were other scenes that made me want those scenes to be over with.
Movie Content: 6/10

The print is presented in 1080p/AVC MPEG-4 with a 2.40:1 aspect ratio. Colors are vivid throughout the presentation and even better once the trio hits the woods. The vegetation, foliage, trees looked really good. Details are also good providing a clear looking image and depth. The print is clean and pristine from any artifacts..
Print Quality: 8/10

The audio is presented in Dolby TrueHD 5.1 mix. This film is more of a front heavy presentation with this being dialogue driven. Dialogue came through the center channel clear with no issues. The rears didn’t get much usage except for some subtle effects. With this film being more dialogue driven, this is what I expected.
Audio Quality: 8/10

Overall, this was a decent film that had me laughing at some parts while waiting for others to end. Seth Green fans will be highly impressed with his role in this film. For fans of the film they will find the video and audio presentation to be fairly good on Blu-ray.
Overall Rating: 7.5/10