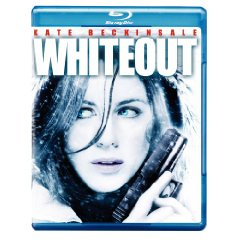 Baby, it’s cold outside: that’s the problem for U.S. Marshal Carrie Stetko (Kate Beckinsale), the only law-enforcement officer assigned to Antarctica. On the verge of shipping out before the really bad weather hits, Carrie is confronted with a mysterious murder that sounds like a riddle: how’d a lone corpse find its way to the middle of an ice field, as though dropped from a great height? And what’s this have to do with the prologue about a Soviet fighter jet crashing some decades earlier? Whiteout, based on the graphic novel by Greg Rucka, solves these questions in a brisk if mostly preposterous manner, and it moves swiftly enough so you don’t have to spend too much time on the plausibility of it all. Among the other snowbound stragglers are a U.N. investigator (Gabriel Macht, of The Spirit), some cocky pilots (Alex O’Laughlin, Columbus Short), and a grizzled doctor (Tom Skerritt). If the presence of Skerritt conjures up memories of Alien, with its ten-little-Indians structure and female warrior, hold on–Whiteout doesn’t actually have a supernatural twist to it, and Beckinsale is no Sigourney Weaver. But director Dominic Sena (undistinguished by his cheesy film Swordfish) puts the screws to the material in a relentless way, and the vast exteriors (shot in Canada) are impressive. And when it comes to one particular wow-you’re-really-going-there instance of potential amputation for a main character, the film doesn’t back down. In fact it sort of revels in the moment.

While many have found graphic novels to be an excellent template for film adaptations, not all of them translate well to the big screen. Sadly, such is the case with Whiteout, which suffers in everything from the major (lackluster characters, crippling flashback quantities) to the minor (shoddy special effects, blatant continuity errors). As Kate Beckinsale trades fangs and skintight leather for parkas, she also leaves the entertainment value out in the cold. At least the suspense is handled with some care, though the harsh weather is far scarier than the ice-pick wielding villain.

Movies like 30 Days of Night or The Thing have already, more impressively, utilized an abnormally cold setting and toy with the viewer’s fears of extreme isolation, distrust and paranoia. In Whiteout, claustrophobia, asphyxiation and being buried alive are also introduced, along with the common, location-specific “freezing to death.” What isn’t so notable is the whiteout of the title, a snowstorm with 100 mph winds that prevent visibility beyond six inches. During the brief scenes dealing with the storm, the lack of sight is frequently anticlimactic, particularly when the blurry, fighting figures are nearly indistinguishable.

Director Dominic Sena (Gone in 60 Seconds, Swordfish) must have been exceptionally proud of the special makeup effects department, donating generous amounts of screentime to disturbing shots of badly mutilated bodies. To make up for the grisly images is an immoderately gratuitous shower scene with Beckinsale that somehow produces no inappropriate nudity. Apparently the clarity inside a bathroom is as hindered as outside in the blizzard.
Movie Quality: 7/10

The print is presented in 1080p/AVC MPEG-4 with a 2.35:1 aspect ratio. Colors are deep and well saturated throughout the entire presentation. Mainly the color white is primarily used here. Blacks are strong and almost inky at times. Nowhere did the image ever appear soft with such strong colors and black levels. Flesh tones were also natural. There is some subtle grain in a few scenes, but never a distraction.
Video Quality: 9/10

The audio is presented in Dolby TrueHD 5.1 mix. The soundfield is immersive at all times no matter if it is the special effects or dialogue. I was literally amazed with the amount of panning from each speaker in the rears. It sounded as if there were all kinds of action going on in the room. Bass was punchy as it shows with the amount of effects and explosions. Dialogue is also well placed in the center channel sounding crisp and clear. The best part of this all around aggressive soundtrack is that it is well balanced between the dialogue and sound effects.
Audio Quality: 9/10

I went in with different expectations for ‘Whiteout’ as the previews made this film look like one hell of a movie from the actions scenes. Not even Kate Beckinsale could save this film from being a been there, done that suspense thriller taking a nod from films like ‘The Thing’ except we have a psychopath killer in this one. Video and audio are really well done. The extras are on the light side which is a disappointment. I would suggest a rental first before considering a purchase.
Overall Rating: 7/10