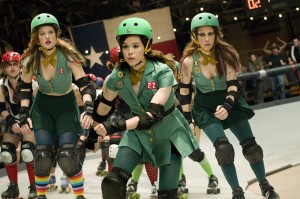 Drew Barrymore makes her bow as a director with this Roller Derby coming-of-age number, which shares the spirit of so many of Barrymore’s movies: it’s loosey-goosey, cheerful, and buoyant in waving its “Girls Rule!” flag. On screen, Barrymore relegates herself to a slapstick supporting role, handing the lead to Juno gal Ellen Page. Page plays a Texas teen with a yen to join Austin’s Roller Derby squad, complete with new professional moniker Babe Ruthless, but she’ll have to keep the side career secret from her beauty-pageant-obsessed Mom (Marcia Gay Harden) and football-watchin’ Dad (Daniel Stern). A coming-of-age tale emerges between bouts of skating on the RD track (Jimmy Fallon plays the goofy Derby announcer), with a dash of romance added in the form of a generic Dude in a Band. Kristen Wiig does surrogate-mom duty as a teammate, Juliette Lewis is appropriately out-there as a track rival, and Andrew Wilson (bro of Owen and Luke) gets some hilariously poker-faced lines in as the team’s coach. All the pleasant stuff makes you almost overlook how ramshackle the movie is, and how standard-issue the parental tensions (even if Harden is a total pro, as always). Ellen Page doesn’t offer the innate audience-friendly cuddliness of Barrymore herself–thus her apt casting as Juno‘s brittle heroine–but her rapt focus is something to behold. “Babe Ruthless” indeed.

“Whip It” is surprisingly good in spite of itself, conventional as a sports movie yet mature in its development of character. It’s also an entertaining spectacle, which is relief for me since I’ve never given much thought to women’s Roller Derby (or even sports in general, but that’s a topic for another day). Drew Barrymore has done well to hype it as her directorial debut; she proves that she not only has the technical skills, but also the ability to move a story along through dialogue, pacing, and emotion. Having practically grown up in front of the camera, I think it’s safe to assume she knows a thing or two about what a film needs in order for it to work. The first thing she did right was cast Ellen Page, who has repeatedly demonstrated just how versatile an actress she is.

She’s no exception here. She plays seventeen-year-old Bliss Cavendar, who was raised in a middle-of-nowhere Texas town and gets by as a diner waitress. Her overbearing mother, Brooke (Marcia Gay Harden), a product of a very different set of standards, pressures Bliss into competing in beauty pageants, believing you have to make do with what you’ve got when you’re young and attractive. When Bliss is made aware of a Roller Derby match in nearby Austin, she decides to go and see what all the fuss is about. Lo and behold, she likes what she sees. She then meets Maggie Mayhem (Kristen Wiig), a teammate for the Hurl Scouts, and is encouraged to try out for the team. Maggie is one of several teammates that has adopted a clever nickname; some of the other Hurl Scouts are Smashley Simpson (Drew Barrymore), Rosa Sparks (Eve), and the Manson Sisters (Kristen Adolfi and Rachel Piplica).

Under the guise of taking an SAT studies class, Bliss sneaks away to Austin every week for practice. Conflict abounds: Not only have the Hurl Scouts never won a single game, Bliss’ teammates are also unaware that she’s underage (you have to be twenty-one in order to be considered for Roller Derby). By the time she starts participating in matches, she develops a rivalry with Iron Maven (Juliette Lewis), the confrontational leader of undefeated champions of Roller Derby, the Holy Rollers. Nevertheless, Bliss has never felt more alive. At long last, she has found something she loves to do, and she does it with people she enjoys being around. Eventually, she will have to find and maintain that delicate balance between her passion, her family, and her life back home, a process that isn’t as easy as it might seem.
Movie Quality: 9/10

The print is presented in 1080p/AVC MPEG-4 with a 2.40:1 aspect ratio. The film is very colorful throughout the entire presentation with excellent details. Colors popped and were vibrant which resulted in a detailed image. There were a few scenes where the camera was panned out which gave that particular scene a lack of focus bringing the level of detail to a lower grade. There is some subtle hints of grain throughout the print.
Video Quality: 9/10

The audio is presented in DTS-HD MA lossless 5.1 mix. With ‘Whip It’ being a drama/comedy, is great for a film that is dialogue heavy with crisp and clean sound through the center channel. There isn’t much going on with the soundfield in terms of special effect, but the soundtrack helps fill the soundfield. I felt like the rear speakers didn’t get as much of a workout as they probably could have.
Audio Quality: 9/10

Mostly, the story in Whip It is the same as any other coming-of-age story, where the young adult ends up learning about their selves, their family and life in general. Add into it a love interest and some “life lessons,” and you basically have every other growing up story in Hollywood.
Overall Rating: 8.5/10