When in Rome Blu-ray Review 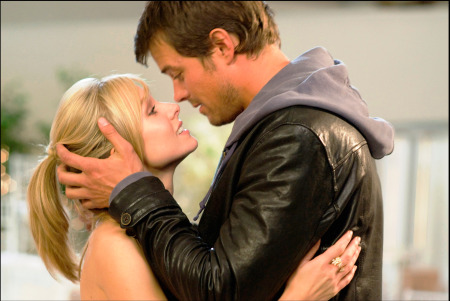 An ambitious young New Yorker (Kristen Bell), disillusioned with romance, takes a whirlwind trip to Rome where she defiantly plucks magic coins from a fountain of love, inexplicably igniting the passion of those who threw them in: a sausage magnate (Danny DeVito), a street magician (John Heder), an adoring painter (Will Arnet) and a self-admiring model (Dax Shepard). But when a charming reporter (Josh Duhamel) pursues her with equal zest, how will she know if his love is the real thing? 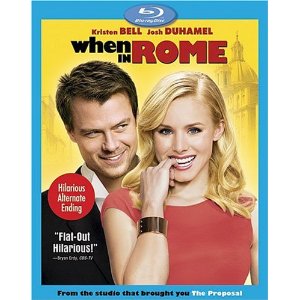 I’ve almost just about had it with all these romantic comedies postulating that beautiful girls are so dang unlucky in love, that they can’t land a dude. Although, okay, to turn it around, I don’t really want to watch a flick featuring an absolute bow-wow who’s unlucky in love, so I guess I know where the cinema industry is coming from. For instance, WHEN IN ROME happens to star Kristen Bell instead of, say, Rachel Dratch. So it makes more sense when, in the movie, a vain male model informs Kristen Bell: “I don’t know whether to look at my own reflection or you. That’s how beautiful you are!” Kristen Bell is easy on the old eyeballs.

Kristen Bell plays Beth Martin, a harried curator at the Guggenheim musem. Beth is dedicated to her career more so than to any boyfriend, and this is why her latest beau had dumped her a year ago. And yet Beth can’t help but fixate on her dismal love life, so it’s more a downer when she learns that her baby sister is set to wed this dashing Roman after a mere two weeks’ acquaintance. Beth flies to the Eternal City for the ceremony. Things happen. She ends up wallowing in self-pity in the famous Fontana de Amore, where all romantics toss in coins and wish for love. The plot gets going when Beth, inebriated and not buying what the Fountain of Love’s selling, plucks five coins from the fountain. So take that, Fountain of Love. Beth wasn’t aware of the legend.

Legend has it that the Fountain’s magical flow is reversed when a coin is taken from the Fountain, that whoever absconds with that coin then becomes the target of love from whoever had originally tossed in the coin. Back home in New York, Beth Martin is suddenly beset (I guess “courted” is another word) by five weird guys: a street magician (Jon Heder), a tortured Italian painter (Will Arnett), a self-absorbed male model (Dax Shepard), a sausage mogul (Danny DeVito), and an accident-prone sports reporter (Josh Duhamel) who once was struck by lightning. Of these five, Nick the sports reporter comes off as the most normal. The film doesn’t at all try to be subtle in fingering Nick as the guy we should root for.

One of the biggest snafus, I think, is that the film peppers in too many uninteresting, unfunny oddball personalities. Beth’s offbeat best friend and Nick’s best friend seem like they’re there only because the romantic comedy formula calls for an offbeat buddy. More tellingly, Beth’s suitors seem more creepy than quirky and sweet. Excepting Nick, these guys come off more like stalkers. In one scene Jon Heder’s street magician breaks into Beth’s apartment, and that’s creepy enough. But when his buddy Pedro from NAPOLEON DYNAMITE tags along to record the proceedings, it really becomes this disturbing $#!+, man. And the first thing that struck me when Beth scrambled with those five coins from the Fountain: what if one of those coins had belonged to a woman? That would’ve been a nice reveal.
Movie Content: 5/10

The print is presented in 1080p/MPEG-4 with a 1.85:1 aspect ratio. The print looks very good throughout without any apparent issues. Colors are vibrant and carry pop which brings out the fine details. The detailed scenes stand out very well. Blacks are deep. I found the print to be crystal clear with no artifacts or print damage.
Video Quality: 9/10

The audio is presented in DTS-HD MA lossless 5.1 mix. This is not an audio mix that you will go in expecting huge things from the soundfield as it is primarily a dialogue driven film. The dialogue is clean and clear through the center channel with no apparent issues. I was rather happy with the way the film sounded considering that this was more of a dialogue centric film.
Audio Quality: 9/10

The picture never does work out the height differential between Bell and Duhamel, and so there are times when they just look awkward on screen simply because of his towering over her by a foot or so. At least Duhamel wasn’t shown alone with Alexis Dziena who plays Kristen’s younger sister. I would recommend this as a rental only if you are interested.
Overall Rating: 6/10