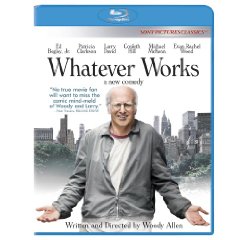 Woody Allen’s cynical sensibility so superbly dovetails with Larry David’s acerbic misanthropy, it’s a wonder they haven’t worked together before. But no matter, fans of Allen, David, and especially David’s Curb Your Enthusiasm will delight in the ability of Whatever Works to find humor in the darkest and most abrasive of life’s corners.

The crux of this odd love story involves the unlikely friendship between David’s character (the brilliant, kvetchy Boris) and the Southern beauty queen with a heart of gold and a brain of wide-open spaces, Melodie (the always-surprising Evan Rachel Wood). Boris takes on Melodie as a tutorial project, showing her the bleak ways of the world, and Melodie takes care of Boris with crayfish and Fred Astaire movies. There are other memorable performances by Patricia Clarkson, as Melodie’s deeply religious and tightly wound mama, and Ed Harris, as her husband, a Southerner slightly to the right of George Wallace. The parents come to the big city to reclaim their wayward lamb, and when the Southerners meet the New Yorkers, sparks fly–in ways both good and slightly scary.

arry David (of Curb Your Enthusiasm fame) plays Boris Yellnikoff, a caustic, retired physicist who walks with a limp due to a failed suicide attempt. Now, Boris teaches chess to “zombie-minded imbeciles.” Evan Rachel Wood plays Melodie, a naïve runaway from Mississippi, who stumbles into Boris’ life…Against all odds, the two marry and Melodie’s parents (played wonderfully by Patricia Clarkson and Ed Begley, Jr.) both, separately, find her.

Larry David plays an older, mostly washed up character who has strong, negative views on everything, freely shared. One night, a young woman from Mississippi needs somewhere to stay and she is completely overwhelmed by New York. Reluctantly, David puts her up. She won’t go away no matter how insulting to her he is. Her mother is Patricia Clarkson, who eventually also puts in an appearance in New York. Then her father, Ed Begley, Jr, appears as well. Each of them makes rapid fire adjustments to becoming a New Yorker. They are on the cusp of being amusing during most of the movie but I just never quite buy them as real people.
Movie Quality: 8.5/10

The print is presented in 1080p/AVC MPEG-4 with a 1.78:1 aspect ratio. Colors are stunning with this transfer, carrying a very bold and vibrant color palette throughout. Blacks are deep helping provide a very detailed image. Fleshtones are natural and realistic. There is a thin layer of grain throughout that never becomes obtrusive.
Video Quality: 8.5/10

The audio is presented in DTS-HD MA lossless 5.1 mix. Dialogue through the center channel is very clean and crisp. The music on this soundtrack is what mainly pushed the audio in the soundfield. The rears would mainly get some action when music would play or the use of any effects.
Audio Quality: 8/10

The film works very well due to the unlikely chemistry between the two stars and because of David’s unflinchingly dyspeptic portrayal. If you are a fan of Allen or David you will enjoy this and is highly recommended.
Overall Rating: 6.5/10