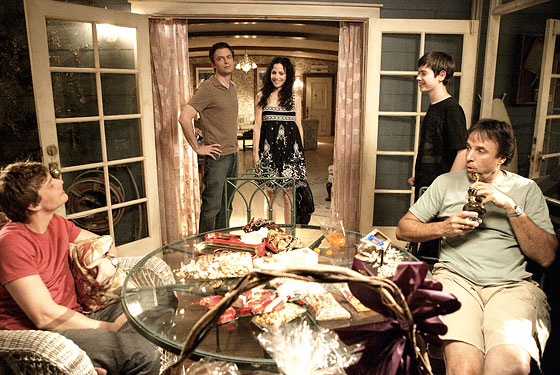 Season 6 of this highly acclaimed series turns over a new leaf when pot-selling soccer mom Nancy Botwin (Golden Globe® winner Mary- Louise Parker) tries to leave behind her illegal operations. Includes the complete Season 6 with all 13 episodes on 2-discs and is loaded with special features!.

After the rather low key Seasons 4 and 5 (great in their own right, but vastly different from Seasons 1, 2 and 3), Weeds seemed like it was heading for it’s end. In all honesty, where could this series possibly go? Well, the answer awaits in the immensely rewarding 6th Season.

After the shocking events in the 5th Season’s finale, Nancy and the gang (minus Celia, which is a blessing since the show didn’t need her anymore), are off on the road. Sending the characters on the run was a risky but inspired move because it exhausts them dramatically, puts them in contact with some wacky people and locations (adding much of the humor missing from Season 5), adds a real sense of urgency and danger and keeps the pace brisk and engaging.

What works best about sending Nancy and Co on the lam is that it also lets the show backtrack it’s history, letting the characters come to terms with what they have done over the years. It’s in that self reflective nature that the show brings in a wholly unexpected emotional level. The finale here is not necessarily shocking in terms of plot, but shocking for what Nancy does emotionally, when you see it, you will never think she had it in her. Season Six of Weeds is decidedly different in almost every aspect, but it also brings all of the shows past seasons into a greater light.

Since we finally get to really see what is going on under the surface with Nancy, Andy, Silas, Shane and yes, even Doug, we begin to understand their past (before the show started), their actions during the series and then how they react during Season Six. With the writing in such top form, the acting is even better. Mary-Louise Parker is as riveting and unlikeable as ever as Nancy Botwin (though the frustration you feel with her during the season is specifically calculated and snaps into focus during the finale). Justin Kirk really takes the front seat as a father figure and leader, being the emotional ground for which the family stands. Hunter Parrish as Silas gives a haunting, aching performance showing how he is really questioning his role in the family and what he truly wants in life. Alexander Gould as Shane is as dark as can be, but we also get to see beyond that facade and into the soul of a tortured young boy. Kevin Nealon as Doug is not exactly needed but adds some nice comedic touches and the send off (for now at least) of his character is rather poignant. Season Six also has a fantastic array of guest stars including Linda Hamilton, Mark-Paul Gosselaar, a very memorable and funny Richard Dreyfuss and a slew of returning cast members from previous seasons (how these past characters are integrated into the story is very clever).

The print is presented in 1080p/MPEG-4 with a 1.85:1 aspect ratio. Colors are deep and well saturated throughout the entire presentation. Blacks are strong and almost inky at times. Nowhere did the image ever appear soft with such strong colors and black levels. Flesh tones were also natural. There is some subtle grain in a few scenes, but never a distraction. Blue tints look very strong as this color is used in several scenes. You will not be disappointed at all by the video quality.
Video Quality: 9/10

The audio mix is presented in DTS HD 5.1 Master Audio lossless track. Since the movie was originally a 2-channel stereo release, the lossless DTS-HD Master Audio soundtrack is mostly front-channel. There is very little for the surrounds to do, and one has to purposely get up close and personal with your surround speakers to hear anything at all through most of the movie.
Audio Quality: 9/10

If you are a long time fan of the series, Season Six of Weeds will be vastly rewarding and emotional for you, it’s a complex, decidedly different, and introspective season that rewards in spades. A great show that just keeps getting better.
Overall Rating: 9/10