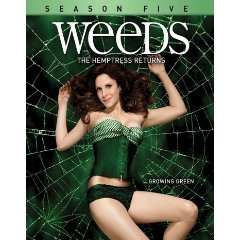 The hemptress returns in the complete fifth season of the Showtime’s; Original Series, WEEDS. When pot-selling soccer mom Nancy Botwin took her homegrown business south of the border, she found the grass wasn’t greener on the other side. Now she’s pregnant with the child of a powerful politician turned dangerous drug lord; or is she? Doug and Silas are trying to branch out on their own, Andy is looking to score, and Celia attempts to turn the tables on her kidnappers. With enemies out to smoke the Queen of Green, Nancy’s sure to find a whole new crop of trouble in an all new season of WEEDS; starring Emmy and Golden Globe winner Mary-Louise Parker.

When “Weeds” moved from California suburbia to a Mexican border town in season 4, I was hoping that it would give the show the creative shot in the arm it needed. For a while, it seemed to work, and season 4 ended on an intense and serious note, with Nancy dealing with the ramifications of ratting out the drug tunnel that was also shipping girls into slavery.

The actors on the show are excellent (Especially Mary Louise Parker and Justin Kirk), but the writers have them all wandering around aimlessly, going from one hapless mess to another. The season started with Nancy in peril as her drug kingpin/mayor boyfriend tried to decide whether or not to kill her for her betrayal. Instead, upon verifying that Nancy is indeed pregnant with his son, he marries her and pledges love and devotion. Andy decides he’s in love with Nancy and wants to be the father figure her children desperately need, but after Nancy jilts him he ends up in love with Nancy’s gynecologist. Elizabeth Perkins is a wonderful actress, but her Celia character, as well as the handful of other Agrestic refugees, have little reason to be on the show anymore. The only character who develops in an interesting direction is Shane. His character has always been strange and offbeat, but it appears that finally,after years of living in chaos and moral deprivity thanks to his Mom, he’s now become completely psychotic. The cliffhanger he provides by casually murdering Nancy’s archnemesis is one of the best things in the season.
Movie Content: 8.5/10

The print is presented in 1080p/AVC MPEG-4 with a 1.78:1 aspect ratio. The picture clarity is outstanding throughout, with plenty of testings for the darks, color variances and flesh tones. There was only one scene in one episode where I caught any falter (the night scene where Nancy thinks about running away with dufus, sitting on the bench in her recently discovered dead garden). The outdoor dance scene in the public square demonstrated a nice rainbow of color with no issues.
Video Quality: 9/10

The audio is presented in DTS-HD MA lossless 7.1 mix. The sound however was disappointing. A let down only because it is 7.1 DTS, but I counted five times in the whole season that it actually got used (the birds while Celia is in the rebel camp, the boys on their nature hike, and a few indistinct scenes), so it almost feels like a waste.
Audio Quality: 7/5

The show did have some great and very funny moments, but I feel so many characters are left without a real story or purpose, which is why so many times stories just end so quickly, as they tried something that just didn’t work, so they gave up. Hopefully the season finale’s promise of a stronger story for the supporting players and Nancy will lend itself to a much better season 6. Video was great on the Blu-ray, while the audio left a lot to be desired. If you are a fan, this is a definite purchase for you.
Overall Rating: 8.5/10