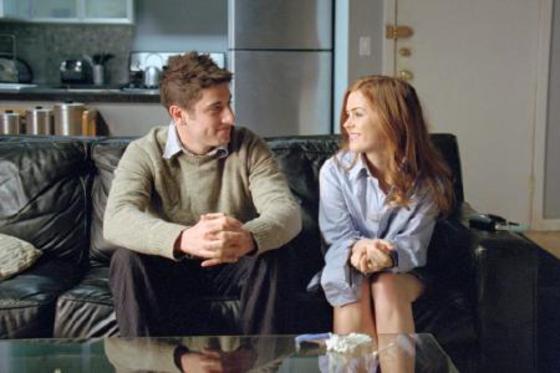 Best known as a comedian, Stella’s Michael Ian Black makes his directorial debut with Wedding Daze, AKA The Pleasure of Your Company. In the prologue, Anderson (Jason Biggs) dresses up as Cupid and proposes to his perfect girlfriend, who promptly keels over. A year later, he’s still in mourning. Meanwhile, Katie (Isla Fisher) is also seeing a seemingly flawless fellow, and though her mother (Joanna Gleason) pressures her to accept his proposal, Katie has her doubts. The next day, she meets the unemployed Anderson at the diner where she works. On a dare, he asks her to marry him. Not only does she accept–she moves in with him. They make for an odd couple, but not as odd as their parents: Katie’s stepfather (Matt Malloy) is a Jewish inventor, while her birth father (Joe Pantoliano) is a Buddhist convict; Anderson’s parents (Margo Martindale and Edward Herrmann), on the other hand, are very happily married (suggestive words send them into a sexual frenzy). Clearly, Anderson and Katie’s differing backgrounds create a momentary stumbling block, but their breakup lasts as long as their courtship–blink and you’ll miss it. Denied a US theatrical release, Wedding Daze is a rough-around-the-edges, if sweet-natured romp. At the very least, it’s superior to other wedding-oriented comedies of the time, like the crass License to Wed. There are a few unnecessary gross-out gags, but an appealing cast–including Rob Corddry as a good-natured deputy–distract from the more awkward moments. 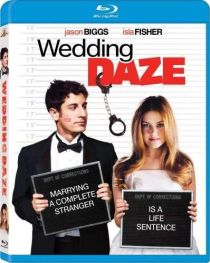 Not quite what I would have expected (based on trailers in advertisements), but not bad. Given the leads, and backgrounds of same, I expected something more along the lines of say American Pie or Wedding Crashers, but this was rather tame. Note that says tame, not lame. Released straight to video, rather than going to theatres, one might think the movie here isn’t worth the time, but that isn’t true. Perhaps somewhat in line with the American Pie ‘wedding movie’, this one is certainly formulaic but delivers a cute movie if you care to sit and watch it.

Anderson (Jason Biggs) has his anticipated fiance unexpectedly become, well, unavailable. Heartbroken, not ready to move on, despite his best friend telling him that his relationship wasn’t ready to move on to the next level begin with, he’s somewhat dared into striking up a new relationship. One that by chances happens to involve Kate (Wedding Crasher’s crazy red head Isla Fisher). So starts a rushed romantic relationship as the two characters propose to each other, accept the proposals and then question whether or not their relationship is a a good or bad thing. Can they actually make it through to getting married, or will the baggage each carries ruin things before they can even get started?

The comedy isn’t quite as low-brow (for the most part) as any of the American Pie movies, or say Saving Silverman (another Biggs starring role) would be, but there are some funny scenes stolen by Anderson’s parents and Katie’s as well.

The print is presented in 1080p/AVC MPEG-4 with a 1:85:1 aspect ratio. Picture quality for the film is quite vibrant, black levels are pretty good considering this is a catalog title and I detected no artifacting, no edge enhancement on the video. For the most part, fans of the film should be pleased with the picture quality and vibrant colors.
Print Quality: 8.5/10

The audio is presented in a DTS-HD Master Audio 5.1 mix. The film is primarily dialogue and music driven. Dialogue is clear and understandable as is the music coming from the front and center channels. There are some moments where the surround channels are used. When Isla shoots a gun into the ceiling or when Matador steps on the brakes of his car, you can hear the surround channels being utilized.
Print Quality: 8.5/10