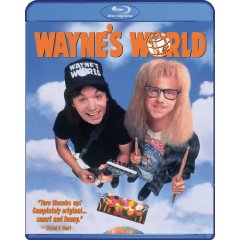 TV’s Saturday Night Live has been like the evil twin of the legendary alchemist’s stone, which supposedly could turn lead into gold. SNL usually does the opposite, taking rich comic premises from short skits and extrapolating them into overblown and unfunny full-length films. (“The Coneheads”? Puh-leeze!) But this film proved to be the exception, thanks to Mike Myers’s wonderfully rude lowbrow humor and his full-bodied understanding of who his character is. Wayne Campbell (Myers) and his nerdy pal Garth (Dana Carvey) are teens who live at home and have their own low-rent cable-access show in Aurora, Illinios, in which they celebrate their favorite female movie stars and heavy-metal bands. When a Chicago TV station smells a potential youth-audience ratings hit, the station’s weasely executive (Rob Lowe) tries to coopt the show–and steal Wayne’s new rock & roll girlfriend (Tia Carrere) at the same time. It’s filled with all kinds of knowing spoofs of movie conventions, from Wayne talking to the camera (and forbidding other characters to do so) to hilariously self-conscious product placements and labeling a moment a “Gratuitous Sex Scene.” Dumb–and very funny.

I am probably in the minority opinion, but I think Wayne Campbell is, by far, Mike Meyer’s funniest and most entertaining character, much more so than Austin Powers. Add Dana Carvey’s schwingatude as Garth, and you have a mix of slapstick, 1-liners, farce, satire, and out and out hilarity that has few peers.

The reason why Wayne’s world works, is twofold. First, Wayne and Garth’s characters are better developed than most, and have more than a single facet. The other side of the coin is that other great characters, actually characatures, surround our heroes. Rob Lowe’s intentionally-overdone producer role is a good fit for the overall attitude of the film, ditto for Ed “Al Bundy” O’Neill as the I’d-rather-be-somewhere-else manager of Wayne’s favorite hangout. The list goes on…even the celebrity guests, like Alice Cooper, get in on the act. Unlike some of the SNL-based films, which seem to cut-and-paste characters and try to make them fit into a story, character, supporting cast and story (at least what there is of one), intertwine seamlessly and form a comprehensive and, more importantly, cohesive, package.

The gags are really clever and well-executed, and as stated, a healthy mix of 1-liners, farce, and satire. While occasionally lowbrow, they aren’t as nearly repetitive and randy as those in Austin Powers. This results in a film with a LOT of qoutable dialogue.
Movie Content: 9/10 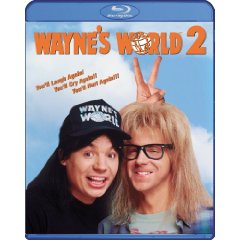 Somewhere in the world, there are probably people who don’t understand why Mike Myers’s character, Wayne Campbell, is funny–which is too bad. Granted, the laughs are often cheap and silly, but there’s no one who can embody a comic character and riff within that character the way Myers does. Wayne and his pal Garth (Dana Carvey) were fixtures on Saturday Night Live before the unexpected success of Wayne’s World, which is about what happened when they tried to take their local cable-access show citywide. This time, they want to stage Waynestock, a mammoth rock festival in their little Chicago suburb, even as Wayne copes with girlfriend Tia Carrere’s interest in record-company exec Christopher Walken. For extra fun, Garth gets involved with the babelicious Kim Basinger. Yes, the humor is scattershot and the plot is lame–but you’ll find yourself laughing nonetheless.

In Wayne’s World 2, Wayne is now out of his parents house and into his own appartment and he is living his dream: doing Wayne’s World for a living. The movie starts off hilarious with a Batman spoof and Wayne and Garth attending an Aerosmith concert.

That same night, Wayne is visited in a dream by Jim Morrison of The Doors who tells him he must put on a rock concert in Chicago called Waynestock (Woodstock). And he must travel to England or something to find an old rock star to help him out.

But Wayne then makes this already challenging task into something even more hard by telling a record producer all of these great bands that are going to be there off the top of his head to impress his girlfriend, Cassandra. He then wins over her attention from her producer (who Cassandra is actually interested in throughout the movie) but realizes that doing what he says will be next to impossible. So now he has to deal with setting up an almost impossible concert while still trying to keep his relationship going with Cassandra.
Movie Content: 9/10

Both prints are presented in 1080p/AVC MPEG-4 with a 2.35:1 aspect ratio. The print on both films is nearly identical. I was fairly scared the first 10 minutes in Wayne’s World as the image from the point the Paramount logo appeared. The image looked terrible with heavy grain and low quality details. Then the film started to take form turning into a better looking image. Colors are muted throughout the presentation. Black levels are deep, almost ink-like at times. Flesh tones are accurate and natural looking. There is some film noise throughout, but it never gets distracting. There are also white specs throughout the film, with them being more apparent during the first half of the film. I am rather pleased with the print considering the age of the film.
Print Quality: 9/10

The audio is presented in Dolby TrueHD 5.1 mix. The soundfield has activity throughout the films when there is music from the soundtrack. The music blarring in the soundfield is really immersive making you feel like you are a part of the scenes. Both films do sound good for being older catalog titles. Dialogue comes through the center channel very clean.
Audio Quality: 9/10

I love both Wayne’s World films albeit them being rather simple and providing some off the wall humor. After the 70’s era of SNL, the early 90’s also provided some excellent skits that led to some fairly good comedies like both Wayne’s World films. It is a shame that we will never see a third film in the franchise due to both Carvey’s and Myers real like dislike for each other. I was quite surprised by both films providing good image quality cleaning up the prints from the previous DVD releases. Fans of both films will not be disappointed at all.
Overall Rating: 8/10