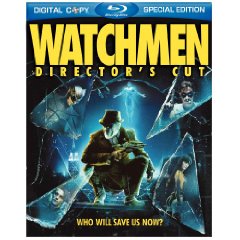 Everybody’s favorite graphic novel comes to the screen (after years of rumors and false starts), less a roaring work of adaptation than a respectful and faithful take on a radical original. Watchmen is set in the mid-1980s, a time of increased nuclear tension between the United States and the Soviet Union, as Richard Nixon is enjoying his fifth term as president and the world’s superheroes have been forcibly retired. (As you can probably tell, the mix of authentic history and alternate reality is heady.) Things begin with a bang: the mysterious high-rise murder of the Comedian (Jeffrey Dean Morgan), a masked hero with a checkered past, puts the rest of the retired superhero community on alert.

The credits sequence, a series of tableaux that wittily catches us up on crime-fighting backstory, actually turns out to be the high point of the movie. Thereafter we meet the other caped and hooded avengers: the furious Rorschach (Jackie Earle Haley), the inexplicably naked Dr. Manhattan (Billy Crudup, amidst much blue-skinned, genital-swinging digital work), Silk Spectre II (Malin Akerman), Nite Owl II (Patrick Wilson), and Ozymandias (Matthew Goode). The corkscrewing storytelling, which worked well in the comic book, gives the movie the strange sense of never quite getting in gear, even as some of the episodes are arresting. Director Zack Snyder (300) doesn’t try to approximate the electric impact of the original (written by Alan Moore–who declined to be credited on the movie–and illustrated by Dave Gibbons) but retains careful fidelity to his source material. That doesn’t feel right, even with the generally enjoyable roll-out of anecdotes. Even less forgivable is the blah acting, excepting Jeffrey Dean Morgan (lusty) and Patrick Wilson (mellow). Watchmen certainly fills the eyes, although less so the ears: the song choices are regrettable, especially during an embarrassing mid-air coupling between Nite Owl II and Silk Spectre II as they unite their–ah–Roman numerals. In the end it feels as though a huge work of transcription has been successfully completed, which isn’t the same as making a full-blooded movie experience.

‘Watchmen’ when it debuted in mid ’80s was a groundbreaking event in the world of comics. Along with Frank Miller’s ‘The Dark Knight Returns’ it began to change the fundamental perceptions of comics — that they were strictly kid stuff. ‘Watchmen’ helped establish that the comic book medium could be used to tell serious, thoughtful, adult-themed stories, that discriminating readers could enjoy and appreciate. Now that Hollywood has discovered comic books as a source of movie ideas, and each comic book adaptation comes practically tripping on the heels of its predecessor, I suppose it was only a matter of time before “Watchmen” was translated to the silver screen. It was worth the wait in this case.

The film is full of excellent performances from its cast, but it is Jackie Earle Haley as Rorschach who stands out from the pack. This brilliant casting choice creates an iconic character that, many years down the line, the film will be remembered primarily for. The other characters are as well drawn as they need to be to lend support to the blue gargantuan, Rorschach being the most compelling, but Manhattan is the centrepiece.

If I had any issues with the film, it had to do to feeling like I was lost a few times throughout. I think that this is the kind of films that needs additional viewings to better understand this intertwined tale. Some might complain that the film is too long at 3 hours, but I felt like this film could have kept on rolling.
Movie Quality: 8.5/10

The print is presented in 1080p/VC-1 codec. The image quality is absolutely stunning and probably one of the best image quality on Blu-ray for a stylistic film. Colors are strong bringing the world of ‘Watchmen’ to life. The color palette is also vibrant bringing out the comic book presentation of the film. Blacks are deep looking like the ink came right off the pages of the ‘Watchmen’ comic book series. Details are also very good with some very accurate looking fleshtones.
Video Quality: 10/10

The audio is presented with a DTS HD Master Audio 5.1 mix. This is a first for Warner Brothers on Blu-ray as they are dabbling with DTS-HD in this huge release. The audio is excellent receiving demo worthy praise. From the action to the dialogue scenes, I felt immersed the entire time. Bass is just perfect with the score and even adding that excellent punch with gun shots and explosions. The soundfield is engaging at all times pulling me in making this a very atmospheric experience. The rears encompass nice directional movement from speaker to speaker. Dialogue is very clean and crisp through the center channel. If I had one small issue with the dialogue, it felt a notch low at the beginning of the film. This is not enough for me to not score this a perfect 10 with the audio as it packs a punch.
Audio Quality: 10/10

All the special features are offered in high definition which is a definite plus in my book and how it should be for films on Blu-ray. I haven’t been amazed by a special feature on DVD or Blu-ray like the one provided with the Maximum Movie Mode with Zach Snyder. It is such a revolutionary special feature which allows for pop-ups during the movie, but also the director Zach Snyder to chime in and explain pieces of the scenes. He will not only discuss the scene at hand, but also talk about the actors and what lead to the thought behind the scene. It is a evolution in special features and something worth sitting through.

A small complain here is that the Digital Copy is only available for the Theatrical version of the film, which in some ways makes no sense. I think this was done due to the length of the film and the purpose of what a digital copy entails.
Special Features: 9/10

I never read the ‘Watchmen’ series, but after viewing the film adaptation it does make me want to go back and read the graphic novel. While some elements weren’t presented in the best manner in the film, it was an enjoyable 3 hours. The audio and video are demo worth material that actually help this atmospheric film look even better in high definition.
Overall Rating: 9/10