Posted in DVD Reviews by George Theofanopoulos on 20 January 2009 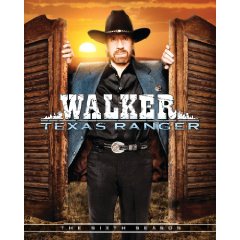 I enjoyed watching Chuck Norris in the 80’s as the high octane action star that was in many action films that were rather enjoyable. How many can say that they were in a film with the legendary late Bruce Lee like Norris can claim. After his feature film successes in the 80’s, Norris moved on to a very successful television show on CBS in 1993 with ‘Walker, Texas Ranger’.

In ‘Walker, Texas Ranger’ Cordell Walker (Chuck Norris) leads the western Texas Rangers. The action is not light at all as Norris takes down even more wrong doers in the sixth season. With Norris, you aren’t going to get Ocar/Emmy worthy performance out of him, so between his fists, kicks, and the rest of the supporting cast it has helped keep the show exciting. No matter how badly an episode begins with someone in turmoil, there is always a happy ending by the end of each episode. It leaves the viewer with a smile with this good hearted show.

The television series ran for a full eight seasons where Norris kicked some ass like you wouldn’t believe over the years. One nice thing about the show is how there was moral values injected into each episode as we still see in this season. The martial arts and Texas justice was still prominent.
For fans that followed the show and especially those new to this series, it was nice seeing that there was a cliffhanger in Season 5. It setup some intrigue as everyone waited for Season 6 to begin with ‘The Wedding Part 2’. The bridge between both seasons is tied up rather quickly in the first episode, and then we are back to our usual Texas Ranger business. 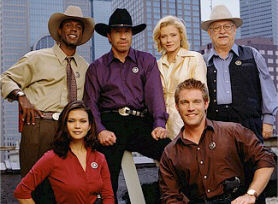 The DVD set features 23 episodes over 5 discs with no added bonus features. It is a shame that there are no special features with this set.

There are the twenty-three episodes of season six spread over five discs:

Fans of the show will enjoy that the sixth season has arrived on DVD. There are a lot of shows that are still playing catch up on the format. Those new to the series, don’t go in expecting any surprises. I do recommend this DVD as a purchase for fans of the show.
Overall Score: 4/5