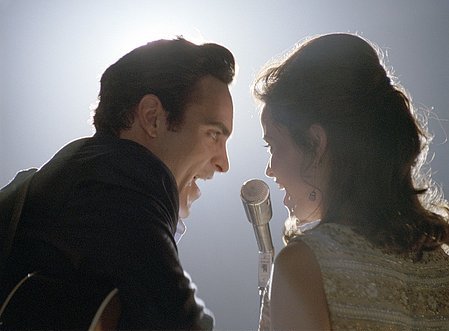 A solid and entertaining biopic, Walk the Line works less as a movie than an actors’ showcase for its stars. Joaquin Phoenix’s total immersion into the skin of singer Johnny Cash is startling–watching it, you can’t believe this is the same guy who whined about being “vexed” in Gladiator. As he evolves from a farm boy to gospel croonin’ plunker to the Man in Black, Phoenix disappears into Cash’s deep baritone, his way of slinging the guitar onto his back, and his hunched-up style of strumming. But it’s more than just picking up mannerisms: Phoenix also sings as Johnny Cash, and it’s quite impressive. 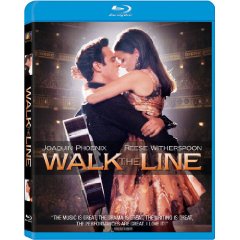 Walk The Line is one of the best biopics I’ve ever seen. We get outstanding performances from Joaquin Phoenix as Johnny Cash and Reese Witherspoon as June Carter. Look also for a strong showing by Ginnifer Goodwin as Johnny Cash’s first wife, Vivian. Waylon Payne also acts well as Jerry Lee Lewis. The plot moves along nicely even though there is little time spent on Johnny’s childhood and his stint in the military; and the cinematography is well done.

When the film begins, we get a brief glimpse into the main themes that ran through Johnny’s life when he was a very young boy growing up in the South. His father Ray Cash (Robert Patrick) was rather cold toward him and became even colder still when Johnny’s younger brother Jack (Lucas Till) died after an accident with a chainsaw. After what seems to have been a brief period of time in the military, Johnny marries his sweetheart Vivian and tries to make ends meet as a door-to-door salesman. However, Johnny’s efforts in sales just didn’t work out–but when he and a couple of his buddies get a chance to record a record for Sun Records things finally begin to look bright for Johnny and his young family.

Of course, complications ensue. Johnny spends time on the road–in fact, he spends a lot of time on the road and after he meets June Carter on the road his marriage to Vivian slowly but surely begins to crumble. Vivian tries hard to get Johnny to stay at home more and focus on his children; but Johnny never seems quite able to do that and after quite a few years they divorce.

Johnny pursues June Carter even though she marries another man; and he never quite gets over his poor relationship with his father. After time, Johnny’s addiction to amphetamines also takes a toll on his career.

Will Johnny be able to finally convince June Carter to marry him? How does his relationship with Columbia Records go while he has all his personal problems? Just in case you’re not familiar with the story of Johnny Cash, I’ll leave these questions and more for you to find out as you watch this excellent film.
Movie Quality: 9.5/10

The print is presented in 1080p/AVC MPEG-4 with a 2.40:1 aspect ratio. The print looks very good throughout without any apparent issues. Colors are vibrant and carry pop which brings out the fine details. The detailed scenes stand out very well. Blacks are deep. I found the print to be crystal clear with no artifacts or print damage. The darker look and feel of the film looks great with the appropriate lighting making this timepiece film standout. Overall, this is a fairly impressive print.
Video Quality: 9.5/10

The audio is presented in DTS-HD MA lossless 5.1 mix. The soundfield is spectacular for this film as it presents a spectacular sense of atmosphere. The songs from the soundtrack sound so crisp in the soundfield. The panning effects across the rears add to the atmosphere as if you were in a concert setting. Dialogue is crystal clear and crisp through the center channel.
Audio Quality: 9.5/10

Johnny Cash fans will love this biopic which is rather good despite a minor flaw here and there. I was very impressed that Joaquin Phoenix and Reese Witherspoon performed all of their songs without any dubbing!. The video and audio are some of the best made available for the Blu-ray format. If you own the DVD, this is the time to upgrade.
Overall Rating: 9/10