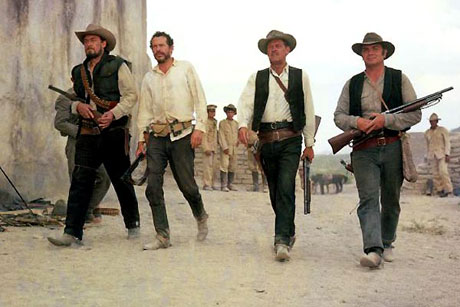 “You’re the first friend I ever had,” grins flamboyant mercenary Burt Lancaster to lean, laconic Gary Cooper with a smile that suggests that he may be the last. They’re a pair of Americans abroad looking to cash in on the Mexican revolution by selling their services to the highest bidder in this energetically cynical south-of-the-border Western. They meet cute, conning, robbing, and out-witting one another in a bit of one-upmanship that bonds the men in mutual admiration, and then team up to escort a royal convoy through revolutionary country. When they discover its secret stash of gold bullion, they revert to their old way, selling out anyone it takes to get the treasure for themselves, even each other. Played out as a seat-of-the-pants con game of shifting alliances and double crosses, this is a cheerfully ruthless tale that served as a veritable blueprint for the Italian spaghetti Westerns of the 1960s. Director Robert Aldrich has a real flair for turning rogues and opportunists into deviously riveting characters, and went on to work the same sort of magic on Kiss Me Deadly and The Dirty Dozen. The cast of character actors features Ernest Borgnine, Charles Bronson, and Jack Elam in the gang, George Macready as Emperor Maximilian, and Henry Brandon as the martinet German captain Danette. 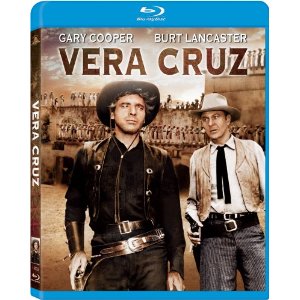 The middle fifties saw the production of an astonishing variety of Westerns of high quality. Robert Aldrich followed “Apache” in 1954 with a cheerful, action-packed adventure called “Vera Cruz,” which starred Gary Cooper and Burt Lancaster sporting a disarming but treacherous grin throughout. Its chief highlight is a display of sharp-shooting in which Cooper and Lancaster demonstrate the effectiveness of the rifles they are trying to sell to the Emperor Maximilian (George Macready) by snuffing out the torch flames ranged round the palace balustrade.

“Vera Cruz” opens during the Mexican revolution in 1866 where two American adventurers decide to join forces and fight for whichever side pay them the most. The saucy Sarita Montiel, who has fallen for Cooper, implores them to fight for the rebels, while Cesar Romero, an aid to the Emperor Maximilian, asks them to fight on his side.

At a ball in the sumptuous Chapultepec Palace, the pair meets the vivacious Denise Darcel who appears as a colorful but doublecrossing French Countess, and soon agrees to escort her on the hazardous journey to Vera Cruz. Later, she informs them that she is actually transporting a gold shipment to the Emperor’s forces. Shortly after, she offers to steal the gold and split it with them.

In spite of the strong presence of Gary Cooper who lines up on the side of the Juaristas, Burt Lancaster steals the show as the smiling, black-dressed American adventurer, unable to forget Mexico’s shining gold.

“Vera Cruz”, with excellent supporting cast, is filmed on location in Mexico. Cooper and Lancaster well know that when one outdraws and shoots the other, one is the “quick” and the other, the “dead.” Ernest Laszlo photography, in SuperScope and Technicolor, captures well the Mexican scenery with glorious shots of Mexico City’s famous Chapultepec Castle, and the pyramids of Teotihuacan.
Movie Quality: 9/10

The print is presented in 1080p/AVC MPEG-4 with a 1:99:1 aspect ratio. MGM has done an excellent job with the transfer of ‘Vera Cruz’ on to Blu-ray. I will say that this wave of Blu-ray releases have been better handled than the previous wave of titles. The black and white image looks absolutely stunning for a film of its age. Clarity and Sharpness is a pretty good yet there is a lack of fine details. There is no DNR or EE to worry about in this film. There are some minor issues with this print with some white specs and some grain throughout. You will not be disappointed at the least bit if you are a fan.
Print Quality: 8.5/10

The audio is presented in a DTS-HD Master Audio 2.0 mix. MGM was very smart here to just take the original track and give us a lossless mix instead of trying to make this into a 5.1 mix. With this film being dialogue centric do not expect your soundfield to be booming throughout the entire film. Dialogue comes through the center channel very clear and crisp.
Print Quality: 8/10