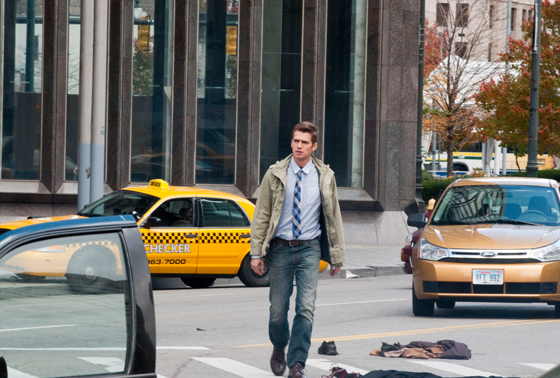 Beginning with its title–a combination of promisingly enigmatic and weirdly specific–this ambitious melding of the Left Behind series, Pitch Black, and any number of Twilight Zone episodes has creepy atmosphere to burn, but its refusal to finally turn over its cards may frustrate viewers in the mood for closure. The plot turns on an admittedly monster hook: following an unexplained mass vanishing, a handful of Detroit residents (including Hayden Christensen, Thandie Newton, and an uncharacteristically muted John Leguizamo) find themselves surrounded by leagues of whispering, carnivorous shadows, kept at bay only by the city’s dwindling sources of light. Anthony Jaswinski’s script drops tantalizing references to religious prophecies, human-made catastrophes, and real-life phenomena (including the still unexplained 16th-century disappearance of the entire Roanoke Colony), but never really seems to fix on the specifics of its particular spooky situation, leaving the audience to fill in an increasing number of blanks. That the film ultimately works as well as it does is due to director Brad Anderson, a filmmaker whose previous work (including The Machinist and the wonderfully upsetting Session 9) has displayed a firm grasp of place. Here, he outdoes himself, creating a barren, unstable metropolis with barely glimpsed slitherings in virtually every corner. If the narrative lived up to its surroundings, this could have been a small classic of the genre. As it stands, it’s a case of the frame overshadowing the contents. 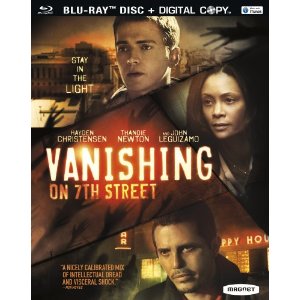 ‘Vanishing on 7th Street’ could have been a good horror film because it delivers so much in terms of atmosphere and genuine fear that is missing from so many horror films these days. The story starts out with a strange occurrence that draws you in and keeps you intrigued for the entire film. The clever use of shadows is creepy and effective and a nice change of pace from the usual gore and blood that is a poor substitute for true horror.

The acting is way above average and the characters react like real people and do things one would think they would do in a situation like this. This film works really well on the big screen because you can feel the scope of the shear mass of this evil darkness that is taking over these survivor’s world. Also, there are many instances where the shadows are alive, but it is done subtly and may be missed on a TV screen.

This movie starts with an interesting premise which is immediately engaging. Unfortunately, very little happens over the next hour to draw you in. The plot and character development stall quite quickly, and the film drags. I kept watching nonetheless, expecting a big pay-off at the end, which, sadly, never came.
Movie Quality: 7/10

The print is presented in 1080p/AVC MPEG-4 with a 2:40:1 aspect ratio. The print is rather inconsistent in certain areas. Colors are de-saturated throughout the entire presentation. The lighting was a bit too bright in many scenes which ended up making the image seem like there was a sun in the background. Black levels are deep and inky. Flesh tones weren’t accurate and looked a tad blah. Details aren’t the best that I have seen in a high definition presentation. There is grain and noise throughout the presentation of varying degrees. This tends to become distracting to the viewer. Some of these choices work in a way for the film due to the nature of the material.
Print Quality: 7/10

The audio is presented in a DTS-HD MA l0ssless 5.1 mix. If there is one redeeming element for this disc, it has to do with the audio presentation. From the dialogue pieces and the effects in the soundfield, the audio is top notch. This is one aggressive mix during the action sequences providing a nice dynamic range and excellent panning. The sound makes you feel as if you are a part of the action and sitting right in the thick of things. Dialogue was clean and clear through the center channel. I found this mix to be well balanced with no point during the film did I have to use my remote to adjust the volume.
Print Quality: 9.5/10

The plot and character development stall quite quickly, and the film drags. I kept watching nonetheless, expecting a big pay-off at the end, which, sadly, never came. The movie ends abruptly with a range of Christian imagery and all major questions unanswered.
Overall Rating: 6/10