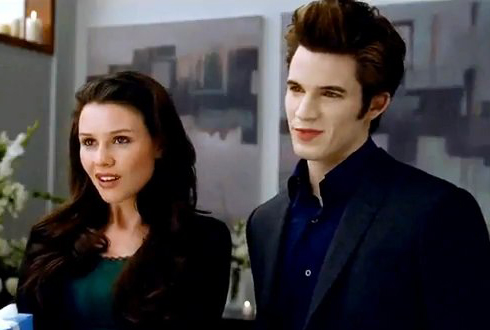 If any pop-culture phenomenon ever deserved a send-up, surely it’s the Twilight world, with its overheated vampire love and shirtless teenage werewolves. The moment is seized by Vampires Suck, yet another movie parody from the team of Jason Friedberg and Aaron Seltzer, the boys behind Disaster Movie and Meet the Spartans. As in their previous spoofs, Friedberg and Seltzer string together some jokes around the plot, a few topical references, and a barrage of irrelevant pop-culture allusions (unless you can figure out how Tiger Woods, the Kardashians, and Lady Gaga are relevant to the proceedings). The first couple of Twilight pictures are rapidly condensed, with heroine Becca (Jenn Proske) moving to a rainy town in Washington and meeting the unnaturally pale Edward Sullen (Matt Lanter), whose vampire clan can hardly keep from draining Becca’s blood on the spot. Of course there’s also wolf-boy Jacob (Chris Riggi), who reminds Becca that he is contractually obligated to take his shirt off and expose his bare chest (his torso here is more elaborate than in the real Twilight movies) every 10 minutes. That joke is an example of how far Vampires Suck is behind its own audience; the movie hits the obvious points, with plenty of dead air in between. A few gags pay off, including Jacob’s werewolf clan (shirtless, natch) breaking out into a dance routine to “It’s Raining Men.” And Jenn Proske, in her film debut, does a lights-out impersonation of Kristen Stewart’s trembling Bella from the series, right down to every last downward glance and stutter. It’s a performance that deserves a better setting. 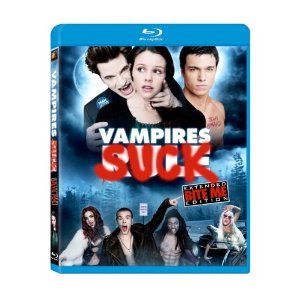 Becca, an anxious, non-vampire teen, is torn between two boys. Before she can choose, Becca must get around her controlling father, who embarrasses Becca by treating her like a child. Meanwhile, Becca’s friends contend with their own romantic issues – all of which collide at the prom.

VAMPIRES SUCK will surprise many people because it’s an improvement over the previous spoof films directors Jason Friedberg and Aaron Seltzer have been churning out for the past couple of years. However, that’s like saying it’s the better crap of all crap. The jokes still aren’t funny and the filmmakers still don’t realize the difference between satirizing and copying. But I would be lying to myself if I said I didn’t find some good that came out of this film because there are some improvements.

First of all, the performances are great by the two leads. In her first film, Jenn Proske does a dead on impersonation of Kristen Stewart. However, it’s sad to see her in this because I think she’s better than this. Matt Lanter also does a great impersonation of Robert Pattinson in his “pain” look. I don’t know what made Ken Jeong come aboard the film but he’s basically playing the same character in “The Hangover”. He’s not in the film that much, though. Also, I think it’s pretty great that Carmen Electra isn’t in here and I’m sure others will agree.

The second obvious thing that stuck out to me was that the film focused on only the first two TWILIGHT films. The filmmakers finally learned that spoofing 600 movies is a bad thing. Saying that, the film still does have the many pop culture references, some too random to comment about. Fortunately, they really did tone it down quite a bit compared to the previous films where you get one every five seconds. You probably get one every five minutes here.

I also liked the fact that it looked like an actual film because if you saw “Meet The Spartans” and “Disaster Movie”, you’d know the films were filled with shoddy sets made up in ten minutes. In here, you might question if they stole the sets and locations from the TWILIGHT films. I don’t know if this counts as something good but I really think the film manages to create a decent storyline from the first two TWILIGHT films.

Overall, the film is still bad because it’s rarely funny, although I will admit I laughed at some bits that took a jab at the TWILIGHT series. If the story is better than the jokes itself, you know you got a bad comedy. It’s an improvement from the last few spoof films, but that doesn’t say much. I really don’t recommend seeing it at all. If you must, just rent it on DVD that will inevitably come out a month after the film is released.
Movie Content: 1/10

The print is presented in 1080p/MPEG-4 with a 2.40:1 aspect ratio. While the film was terrible overall and this concept has been beaten to death, the video portion is pretty good. I found colors to be strong and well saturated throughout the entire presentation. Blacks are strong and almost inky at times. Flesh tones were also natural. The exterior environments looked very good and you can see the details in the forests, trees, and vegetation.
Video Quality: 9/10

The audio mix is presented in DTS HD 5.1 Master Audio lossless track. “Vampires Suck” is a dialogue-driven film but when the soundtrack comes into play it does add to the atmosphere of the film. There really wasn’t anything that stood out, audio-wise the surround channels do a pretty good job in filling the soundfield. If anything, it’s all about the dialogue and the dialogue on the lossless soundtrack is crystal clear. I detected no hiss or any audio problems while watching the film.
Audio Quality: 9/10

This was a terrible movie and probably one of the worst that I saw in 2010. If you are a fan of spoof films, then you will probably enjoy this. I do feel like this genre has been beaten to death and to the point where this needs to end.
Overall Rating: 8/10