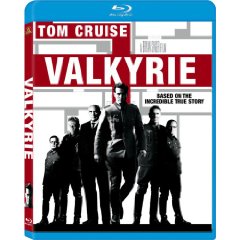 Unpretentious and dramatically straightforward, Valkyrie is a suspenseful yet ennobling story about the last attempt to assassinate Adolf Hitler prior to the end of World War II. Tom Cruise is effective if a little opaque as hero Colonel Claus von Stauffenberg, who channels his anger at Hitler’s atrocities and mismanagement of the war by joining a secret organization bent on killing the Führer. When the outspoken Stauffenberg hits on the idea of linking Hitler’s death with an official policy to safeguard Berlin during a government crisis–a contingency plan called “Valkyrie”–the group realizes a post-assassination coup could be covered by rapidly implementing the plan. History tells us the plot failed, of course, and Hitler killed himself months later. But that doesn’t stop Cruise or director Bryan Singer from approaching the film as a thinking person’s thriller, told from inside the conspirators’ camp, where the outcome of their deeds were uncertain for several tense hours.

In the tradition of The Great Escape, Valkyrie is a war movie full of famous faces, including Kenneth Branagh, Terence Stamp, Tom Wilkinson, Bill Nighy and Eddie Izzard. (The lesser-known David Bamber is very good as Hitler, hunched and cracking under pressure.) The film’s gravity is offset a bit by the fun of seeing all these actors in a factually-based slice of history, and by a few, interesting stylistic flourishes on Singer’s part, including the peculiarly unsettling image of a mosquito sizzled to death in close-up.

The movie focuses on the formation of a plot to kill Hitler using Operation Valkyrie, a plan originally drafted to maintain law and order in the Reich in the event of Allied bombings destroying Berlin. The plotters, led by Claus von Stauffenberg, played ably by Tom Cruise, planned to use Valkyrie as a way to round up the SS and take control of the government after assassinating Hitler.

Also, the complaints about the accents I truly feel are desperate attempts to bash Cruise’s performance. It was director Bryan Singer’s concept to not use false German accents, and not that of Cruise, or the primarily British cast. I agree with Singer’s concept that if feels false, and inaccurate to have people speak in English, but with foreign accents. I know several Germans in real life, and they do not sound very “German” when they speak in English, because the accent is not intended for the English language.

The film is not a light-hearted one, nor does it end well for most of the characters. There are several bloody scenes, but none of the violence is gratuitous. As such, this is a film that will be appreciated primarily by those interested in the history of WWII, or are solid Tom Cruise fans. I am well pleased with the film as a whole, and feel the end product meets the goals of both the producers and their intended audience.
Movie Content: 9.5/10

The print is presented in 1080p/AVC MPEG-4 with a 1.85:1 aspect ratio. Colors are bright throughout the film, but do run warm in several scenes. Blacks are also very deep and strong with quite impressive details. The image is pristine as there isn’t a hint of film grain. Like I said earlier, this is one of those demo reference films that will make viewers drop their jaw to the floor.
Print Quality: 9/10

The audio is presented in DTS-HD MA lossless 5.1 mix. This is a dialog heavy movie, I wasn’t expecting too much from audio to be anything out of this world. My expectations were exceeded from the dialog being so clear that I thought the actors were right in my living room conversing. Once I heard the first set of gunshots and explosions, I was surprised to hear panning and directional effects from the rears in the soundfield. Then add a bombastic bass for gunshots and this is a dynamic audio mix.
Audio Quality: 9/10

All special features are available in high definition, except for one feature in standard definition.

The film is not a light-hearted one, nor does it end well for most of the characters. I really enjoyed ‘Valkeyrie’ more than expected. I highly recommend this film on Blu-ray.
Overall Rating: 9/10