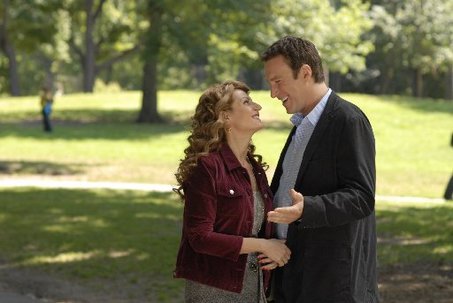 For those in love with love–and even for those who think they’re jaded and over it–Valentine’s Day and its superb cast are the uplifting elixir that’s called for. Director Garry Marshall must have called in every favor he had in Hollywood to line up this amazing cast. Much as Robert Altman does in his best films, Marshall follows intertwining and intersecting couples around Los Angeles as they hook up, break up, and act up as Valentine’s Day–with all its intense expectations–looms. Bradley Cooper plays one half of a couple struggling to get back on track. Julia Roberts plays an army officer en route from Iraq (!) to visit a lover halfway around the world. Jennifer Garner is appealing as the girlfriend of a cad (Patrick Dempsey), who managed to overlook telling her he was married; will Garner’s character go all Fatal Attraction? Standouts include the always-charming Anne Hathaway, whose character supplements her income with a freelance gig that, shall we say, involves using multiple accents over the phone–much to the consternation of her beau, played by Topher Grace. Shirley MacLaine and Hector Elizondo play a long-married couple whose strong marriage may be rocked by an old and very inconvenient truth. And young stars Emma Roberts, Taylor Lautner, and Taylor Swift sparkle enough to draw in younger viewers. And if love doesn’t always go as planned for these couples (and singles), it’s Marshall’s deftness as a director that keeps the scenes moving along crisply to the next lovers, or victims. Marshall seems to be aiming to achieve for Valentine’s Day what Richard Curtis did for Christmas in Love Actually–and if he falls a little short, it’s not due to any lack of star power or onscreen dazzle. “Love is the only shocking act left on the planet!” exclaims Ashton Kutcher’s character. If so, viewers of Valentine’s Day can expect to be shocked–into a warm romance with this, yes, valentine to love. 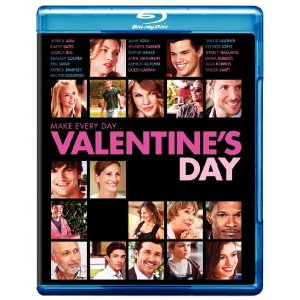 Valentine’s Day is jam-packed with things that make us smile and chuckle, but never really get us to the point of laughing. It’s cute yes, and no it’s not horrible – but it’s not great either.

This film would have been better served as a 12 hour mini-series or even as an entire sitcom spread out over years and years of seasons. Even then, it would still be thick with characters. Having them all jam-packed into two hours with individual conflicts and resolutions is absurd.

None of them seem like characters at all. It just feels like tiny seconds spent with the movie stars that we know them all for, and it’s not their fault. It’s easy to see how appealing this project would be to an actor, knowing they could step in and play a small roll without ever seeing most of the other talent involved. Several actors never appear in a scene together. Imagine the excitement of seeing how it all came together, for the first time at the Hollywood premier. Most of us would have done the same in their shoes.

The two characters that were given the most attention in the story are best friends Reed (Ashton Kutcher) and Julia (Jennifer Garner). Out of respect to the one person who will read this and not see the so-called `twists’ coming from two miles out – I’ll spare you the details of how predictable everything that happens is. Let’s just say, we’ve seen every little turn and mishap and mildly humorous event, a thousand times before, in some other romantic comedy.

On a positive note, you could surely find worse films to pass your two hours with. As chaotic as it is, it is still a blast to see so many popular faces in one movie, and literally everyone was brilliant. And while the writers didn’t develop the characters well at all, or give any of them interesting unique situations to find themselves in -they did do a pretty descent job of tying everyone’s story together by the end of the film.

As if seeing all of them wasn’t entertaining enough, it’s even more fun to see who’s paired up with whom. Julia Roberts and Bradley Cooper play strangers who strike up a conversation while sitting next to each other on an airplane. Anne Hathaway and Topher Grace are the cutest odd couple in the film. Taylor Lautner and Taylor Swift take us back to High School. And Jamie Foxx and Jessica Biel re-unite from their previous film Stealth, as two people who are exactly what the other needs.
Movie Content: 7/10

The print is presented in 1080p/VC-1 with a 1.85:1 aspect ratio. I found this print to be rather eye pleasing with vibrant colors. Fleshtones are very natural and accurate, considering that we see a few bare necessities throughout. Black levels are solid throughout. The image was also sharp with excellent details. The image is clean and pristine making this a very nice looking image.
Video Quality: 9/10

The audio is presented in DTS-HD MA lossless 5.1 mix. This film is a dialogue driven film. Dialogue was clean through the center channel with a nice degree of depth. I never had to raise or lower the volume to make out what was being said. The soundfield does get a few effects into play, but nothing major. The soundtrack takes advantage of the soundfield with audio also lightly pouring through the rears. I found this to be more of a front heavy experience due to the type of film.
Audio Quality: 8/10

As I mentioned earlier, this film would have been better served as a 12 hour mini-series or even as an entire sitcom spread out over years and years of seasons. There was just too many on going stories and not enough time to tell all these stories. On Blu-ray, this film has adequate video and audio presentation which should please fans. All special features are presented in high definition which is a plus in my book.
Overall Rating: 8/10

« 24: The Final Day Coming To Blu-ray And DVD & The Complete Series In A Collectible DVD Box Set
Invictus Blu-ray Review »