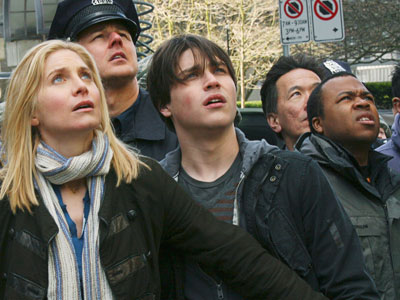 They seem almost godlike among us. They are the alien Visitors who, led by mysterious queen Anna, base their operations out of 29 motherships hovering over 29 global sites. But why 29? The answer lies in the Vs’ secret plan – just one of the extraordinary revelations in Season 2 of V. As that astonishing plan draws closer to fulfillment, a resourceful underground unit of resistance fighters called the Fifth Column redoubles its efforts to undermine it. And throughout are the amazing visuals that are hallmarks of the series: looming spaceships, advanced medical technologies and the fear-inducing morphing of Vs into their reptilian forms. Our world…their rules? 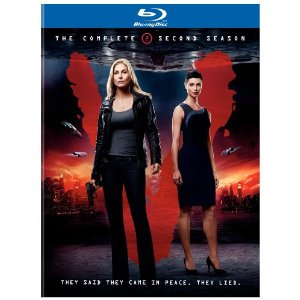 The original “V” mini-series and “V: The Final Battle” were ground breaking, riveting dramas that were essentially a play on the history of the Nazi party and it’s rise to power. The original “V” was one of the most watched mini-series of the 1980’s and won international acclaim for it’s powerful story and strong performances. The 1980’s TV series spin-off that followed did not come even remotely close to living up to either mini-series. The show started with an interesting idea but was destroyed by poor writing, low budgets and uninspired direction and was inevitably cancelled. Toward the end, the only thing the original TV series had going for it was the performance of the always exceptional Jane Badler as evil lizard overlord, Diana.

Season 1 of “V”, the remake, updated the original 1980’s mini-series for a new century while maintaining the promise of the original by adapting the story to fit into a world more concerned with international terrorism than space-Nazi’s.

The new “V” was not an exact copy, it was a re-imagining – which was good, because fans of the original could enjoy something they loved and still be surprised and shocked hand in hand with those new to “V”.

The first season of the new “V” was very much about a show finding its feet and a cast finding their characters, but despite those ups and downs an excellent product emerged that resonated with a decent enough audience to get the show a second year despite some unwise network decisions that almost killed it after it’s highly rated premier.

When season 2 hit, it hit with a bang! The writers still seemed to be struggling with the whole “show don’t “tell” concept that every writer is taught to obey, because exposition is rife throughout most episodes, but with the season now concluded you can see why the exposition was necessary – the writers and producers only had ten hours of television to tell a very complicated story in and try and gain a third year for the fans.
Movie Quality: 9/10

I have always been a big fan of V since it premiered back in the 80’s. I was thrilled to see them remaking it. The series is quiet good, and season 2 is excellent, but it’s half of a story. I would recommend this series to anyone who loved the original or who had never seen it.
Overall Rating: 8/10