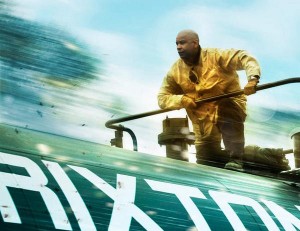 Orson Welles once said that directing a movie was like playing with the greatest toy train set in the world, and Tony Scott seems to be taking him literally. With the caboose of Scott’s Taking of Pelham 123 barely in the distance, the filmmaker turned to Unstoppable, a train-chase picture loosely inspired by a true story (and perhaps just a smidgen by Runaway Train, the 1985 film based on an Akira Kurosawa script). At a Pennsylvania rail yard, some clueless workers let an unmanned train get loose, and the thing is soon hurtling across the countryside. Did we mention that it’s pulling a few cars’ worth of highly toxic material? Did you doubt it would be? Meanwhile, old-time engineer Denzel Washington and new conductor Chris Pine are making a routine run nearby–of course, in the movies, a routine run almost always turns into something wild. This odd couple is the only hope for stopping the runaway, while upper management dithers and an operations-room dispatcher (Rosario Dawson) spends most of the movie talking into her headset. Scott is an unabashed manipulator, and he yanks all the strings at his disposal for this whipped-up pageant: song cues, hype-filled reaction shots, stunts aplenty. It’s all so aggressive, it makes you wish the exciting story could be allowed to tell itself. But the pulse does quicken, if you can turn your mind off for a while. And although it’s faint praise, the movie is undeniably better than Pelham 123. 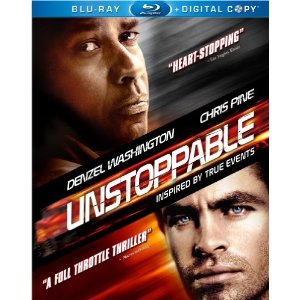 Tony Scott’s “Unstoppable” is a nail biting, heart pounding, relentlessly exciting film. It takes most of the reliable hallmarks of the action picture – death defying stunts, crashes, explosions – and strips them to the bare essentials. There’s no posturing, no big muscles and machine guns, no pompous dialogue, no padding of any kind. There’s only a raw, primal adrenaline rush. The result is a film so taut and gripping that you’re liable to lose the feeling in your hands from clenching the armrests on your theater’s chair. It winds itself up at the start and keeps on winding until the spring is ready to break loose; at the end of it all, when the tension is finally released, you will breathe a sigh of relief … and then want to experience it all over again. It’s kind of like riding a roller coaster.

This film represents a purer, healthier attitude towards the action film. It’s great entertainment, yes, but it also has both a brain and a heart at work. Rather than assault us with bursts of noise and flashes of light, we’re pushed into a genuinely frightening scenario and dragged along with nothing but the hope that it will somehow turn out all right. We’re actually made to feel something. Better still, we’re made to care about the characters, who aren’t disposable war-mongering typecasts but ordinary people thrust into an extraordinary situation. If convention dictates that the key players will become heroes, at least I can take comfort in knowing that this time around, they actually earn that distinction. And no, I don’t care that the film is in all likelihood a gross exaggeration of real life events – I wanted to be thrilled, and thrilled I was.

“Unstoppable” stars Denzel Washington and Chris Pine as a pair of railroad workers. The former is Frank Barnes, a long time engineer for the Allegheny and West Virginia Railroad. The latter is Will Colson, a rookie conductor. They hit it off like oil and water, Frank and his co-workers believing that Will was hired strictly because of family connections to the union. Despite their differences, they’re assigned to work a locomotive together. Frank makes it clear, perhaps a little too strenuously, that Will should ask about something if he doesn’t know what to do. Will’s personal problems continuously distract him throughout the day; he takes calls he shouldn’t be taking, and eventually, he attaches their locomotive to too many trains. Things just don’t seem to be going well.

And it will only get worse. At another station, a lazy hostler (Ethan Suplee) fails to connect an air hose on a train that’s scheduled to be moved, preventing the air brakes from working. He doesn’t think this will be a problem; he’ll simply hook them up after parking the train on another track. Unfortunately, the switch up ahead is not set for the right track, and when he jumps off the main engine to fix it – a highly frowned upon maneuver – the improperly set throttle shifts on its own, speeding up the train to the point that he can no longer get back on. Not only is the train unmanned, it’s now on the coasting faster and faster along mainline. Will and Frank are also on the mainline. And they’re going in the opposite direction.

The print is presented in 1080p/AVC MPEG-4 with a 2:40:1 aspect ratio. Color is vibrant and bold in this transfer. A very good example of that is the colors red and blue stand out quite a bit. The film is so colorful that it is very good in details. There are also moments though where the transfer does lack in a few areas. Lighting was a problem in a few scenes where there appeared to be too much light in the background.
Print Quality: 9/10

The audio is presented in a DTS-HD MA lossless 5.1 mix. This is a demo worthy mix that could easily sell those on the fence about the format. The soundfield is immersive at all times no matter if it is the special effects or dialogue. I was literally amazed with the amount of sound panning from each speaker in the rears. Bass was punchy as it shows with the train running at high speeds. Dialogue is also well placed in the center channel sounding crisp and clear. The best part of this all around aggressive soundtrack is that it is well balanced between the dialogue and sound effects.
Print Quality: 9/10

This movie was a blast! Much better than I ever expected a runaway train movie could be. Good acting and fun dialogue help a lot, with Denzel Washington and Chris Pine proving an effective duo, and Rosario Dawson hitting the perfect note as their connection to the rest of the world. The action starts slowly but quickly gets intense and really never lets up until the very end. This is a highly recommended movie.
Overall Rating: 9/10