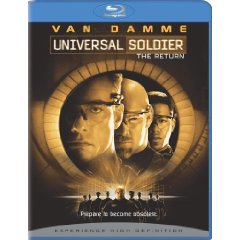 Universal Soldier Luc Deveraux is back. Jean-Claude Van Damme gallantly attempts to resurrect interest in his tepid career with this action-riddled roller-coaster ride. Set in the not-too-distant future, Deveraux has been employed by the government to oversee the new UniSol project. What is UniSol? It’s a military plan to turn dead soldiers into invincible fighting machines (see the first Univeral Soldier for more details). It’s also the scheme that went horribly wrong when the soldiers turned psycho, killing the scientists who created them. Not deterred by this early setback, the government replicates the project. This time they figure that they can control the soldiers through a supercomputer called SETH (kind of like HAL in 2001, but smarter). But, as we all know, machines frequently break down. Pretty soon the computer comes to the conclusion that it’s superior to humans and therefore it must destroy them. Uh oh.

Van Damme to the rescue. The muscles from Brussels heroically leap into action confronting the dangerous soldiers led by Bill (WCW) Goldberg and Michael Jai White (last seen in Spawn). The action is impressive and the stunts are engrossing. Goldberg is charismatic as the cartoonish villain who sneers and snouts while muttering macho things like, “I’m gonna kill that guy.” Van Damme looks more at home in a production that he is not directing, and for once he lets his fists do the talking. Ironically, the movie is missing the gloss and big-budget pathos of its predecessor (created by Dean Devlin and Roland Emmerich), making the original decidedly better.

The first ‘Universal Solider’ was a good action film with a simple plot. There are many issues that hold this sequel such as some of the fighting scenes and my biggest issue with the horrible supporting cast. I have seen some rather horrid movies in my time, but something went wrong with ‘Universal Soldier: The Return’. Van Damme must have done aggravated someone this go around to be surrounded around a bad cast. Only Michael Jai White stands out as the villain. Bill Goldberg has one of the worst performances that brings down the film when he is on screen. Personally I blame the casting decisions for bringing down this film.

It is not the type of action film that keeps you engaged the entire time. All the fights except the final two are jokes. The robotic character of the blank soldiers is lost as these cyborgs make wise cracks, check out the ladies and hold grudges. What a way to hurt a film franchise that could have been much more.
Movie Content: 3/10

The print is presented in 1080p/AVC MPEG-4 with a 1.85:1 aspect ratio. The original ‘Universal Soldier’ on Blu-ray looked rather impressive for an older catalog title. It had its flaws with a softer looking color pallet, but ‘Universal Solider: The Return’ has a rather dull looking image. It is rather surprising since this film is only 10 years old compared to the age of the original. Flesh tones were natural looking with a few characters looking off. This is another area where there is some inconsistency. Grain is prevalent throughout the print, but not in a good way.
Print Quality: 5/10

The audio is presented in Dolby TrueHD 5.1 mix. ‘Universal Soldier: The Return’ sounds decent in the soundfield using front and rears to emulate dynamic sound. Action scenes like guns blazing, explosions, and fight scenes sound a little off with this mix. Not too sure what went wrong with the effects. Dialogue is very clean through the center channel.
Audio Quality: 5/10

The casting hurt ‘Universal Soldier: The Return’ and it does not help that the story feels like a mess. The first two sequels ‘Brothers in Arms’ and ‘Unfinished Business’ were straight to video, but much more enjoyable than this box office blunder. Even worse is that the video and audio are lacking which is a disappointment. Fans of Van Dam and ‘Universal Soldier’ might be happy, while others should stay clear.
Overall Rating: 5.5/10