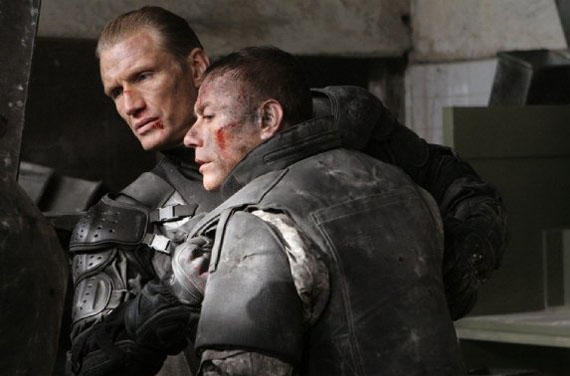 Universal Soldier: Regeneration is a rare sequel that far outstrips the original. A small terrorist group seizes the Chernobyl nuclear reactor, threatening to release a toxic cloud. A military squad is sent in–and decimated by a new and more lethal “UniSol” (played by former UFC Heavyweight Champion Andrei “The Pit Bull” Arlovski). Desperate, the American military forces the decommissioned UniSol Luc Devereaux (Jean-Claude Van Damme) to revert back to a killing machine–even though the consequences to his damaged psyche could be severe… and dangerous. But the standard plot isn’t what makes Universal Soldier: Regeneration so much better than its predecessors (incidentally, you don’t need to see the earlier films to enjoy this one). 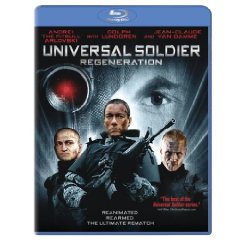 A fun action film with plenty of good stunts and the three main actors getting their varied screen time to satisfy their fans. I had more fun with the supplements but the film handles itself enough to where you get your money’s worth on the Blu-ray.

The story takes place at a ransomed Chernobyl (Bulgaria subbed) by bad guys supported with a renegade scientist who happens to have his own Universal Soldier cache. They threaten to blow up one of the reactors unless some lame demands get met. Enter the American general played by Corey Johnson (worst performance I have seen for him) to facilitate using the cold storage Universal Soldiers. The story lumbers through the usual predictable fights and shootouts, but they got a UFC guy – Arlovski – to play the main bad soldier and he actually did a good job here. The writers found a way to get both Van Damme’s and Lundgren’s characters reused to meet again and the fun continues.
Movie Quality: 8.5/10

The print is presented in 1080p/AVC MPEG-4 with a 2.35:1 aspect ratio. Colors are bright throughout the film, but do run warm in several scenes. Blacks are also very deep and strong with quite impressive details. The image is pristine as there isn’t a hint of film grain. I was literally surprised that this film not receiving a theatrical release did get excellent video treatment.
Video Quality: 9.5/10

The audio is presented in Dolby TrueHD 5.1 mix. ‘Universal Soldier: Regeneration” offers a very aggressive sound mix that is bombastic. This is a very aggressive mix with the soundfield being in use at all times. The surrounds get all kinds of action from sound effects, the soundtrack, action scenes, and voices brings this film to life. Dialogue is clean and crisp with no real issues. This mix is well balanced between the effects and dialogue.
Audio Quality: 9.5/10

After the 2000 release of ‘Universal Soldier The Return’ I did not want to see another film in this franchise. That film really ruined this franchise. ‘Regeneration’ is very well done which keeps you glued to your TV from start to finish with action pumping from start to finish. On Blu-ray this film has excellent video and audio presentation which had me surprised. The special features are lacking which is a shame. If you are fan of ‘Universal Solider’ franchise then you owe it to yourself to check this out.
Overall Rating: 8.5/10