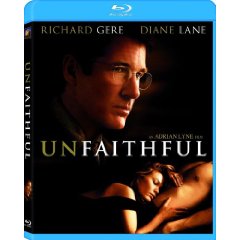 Richard Gere and Diane Lane first teamed up together in Francis Ford Coppola’s ‘The Cotton Club’ eighteen years ago. Then add Olivier Martinez into the mix spicing up this intense love triangle. ‘Unfaithful’ became a box office smash with a worldwide total gross of $119 million dollars. Director Adrian Lyne, Richard Gere, Diane Lane, and Olivier Martinez take a rather simple story providing excellent directing and performances into making this into an intriguing film.

Edward (Richard Gere) and Connie Sumner (Diane Lane) appear to have the perfect marriage and living a very good life in New York. They also have an 8 year old son Charlie Sumner (Erik Per Sullivan). Things haven’t been better for the couple as they have been married for several years. One day when Connie is walking down in Soho, she goes to visit this local book dealer for a book that she had called about. Once she meets Paul Martel (Olivier Martinez), the look of desire hits Connie’s eyes. She begins to become more interested in a look that she received from the suave Frenchman. Paul hands her a copy of the book, ‘The Rubaiyat of Omar Khayyam’. The title of the book begins to really play games with her on the way home in the cab ride. The book title explains, ‘Be happy for this moment, this moment is your life’.

At this point, Paul is on Connie’s mind every waking hour of the day. Connie begins to pay almost daily visits to Paul’s apartment even if it is to stay for a few minutes. The thing is that she doesn’t stick around long enough to really get to know Paul. Then one day when they are meeting in his apartment, all of a sudden one thing leads to another and their affair begins. This begins to make Connie feel so young again and the she gets caught up in the thrill. She begins to make up lies to her husband, even canceling plans for lunch with her husband. When she begins to tell Edward a lie that she has a hair appointment instead, he becomes very suspicious. At this point things begin to unravel, which I will not spoil.

As I mentioned earlier, ‘Unfaithful’ has a rather simple story but the performances are excellent from Richard Gere, Diane Lane, and Olivier Martinez. The real star of the film is Diane Lane; she has to be one of the greatest actresses to grace the silver screen. While she doesn’t receive the proper accolades for her performances, Lane knows how to light up a scene. Lane shows how good of an actress that she is in one scene in the whole movie. She is sitting on the train ride going home after having sex with Paul. As she sits on the train, her emotions kick in taking the viewer along the ride with her as she can’t keep it together once she realizes what she has done. Both Gere and Martinez have a powerful scene towards the end of the film in Martinez’s apartment. Martinez invites Gere into his apartment; the scene between the two is fantastic. Martinez really has the charmer/suave personality nailed down here.
Movie Content: 4.5/5 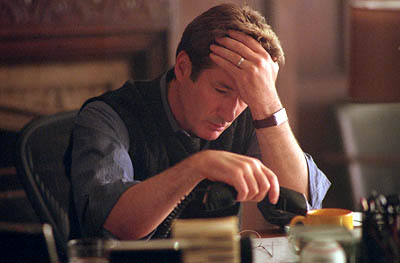 The print is presented in 1080p/AVC MPEG-4 encode with a 1.85:1 aspect ratio. This is a rather huge upgrade on Blu-ray over the DVD. I have owned the film on DVD since its release and have viewed it several times. Colors aren’t the standout here since the film has a dark tone throughout. Where the print excels is with the details providing excellent depth. Black levels are also solid. Fleshtones are accurate and natural. Details in the faces are very good.
Video Quality: 4/5

The print is presented in DTS-HD MA lossless 5.1 mix. ‘Unfaithful’ is a dialogue driven film, with the jump to DTS-HD this film has never sounded so good. Dialogue is clear and crisp with no issues through the center channel. Then add the fantastic score from Jan Kaczmarek which adds a lot of atmosphere to the film. The rears have very low usage throughout the film providing some sound in the soundfield.
Audio Quality: 4/5 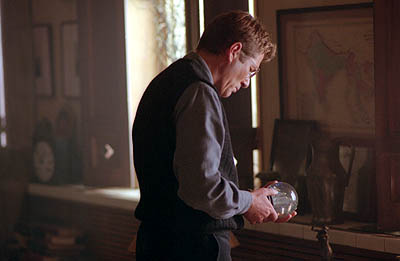 ‘Unfaithful’ is an excellent film that never loses its luster even with multiple viewings. If you are looking for a suspenseful romantic drama, this film will be right up your alley. On Blu-ray, the audio and video are a step above the DVD version so those on the fence about dumping upgrading, this is well worth it.
Overall Rating: 4/5