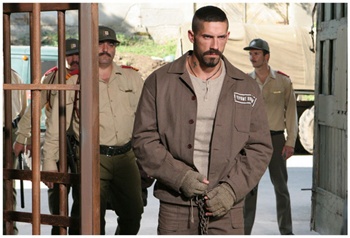 Eight elite fighters–prisoners from maximum security prisons around the world–are brought together by a powerful underground gambling syndicate for a secret, survival-of-the-fiercest battle competition. The prize: freedom for the champion… and a payday of millions to the organizers. Except the syndicate really doesn’t plan on allowing anyone to walk free. Scott Adkins (the fearsome Weapon XI in X-Men Origins: Wolverine) returns as Boyka in a spin-kicking, iron-fisted, ground-and-pound fury of martial arts mastery. With the odds against him overwhelming, Boyka will take on the syndicate his way. If his gambit works, it might send the whole scheme crashing down around them.

Isaac Florentine’s Undisputed 3: Redemption is, in my opinion, the best of the Undisputed series may be meaningful to those who know the earlier films. Scott Adkins reprises his role as Russian inmate Boyka, now severely hobbled by the knee injury suffered at the end of Undisputed 2. No longer the feared prison fighter he was, he has declined so far that he is now good only for cleaning toilets. But when a new prison fight tournament begins – an international affair, matching the best fighters from prisons around the globe, enticing them with the promise of freedom for the winner – Boyka must reclaim his dignity and fight for his position in the tournament.

He succeeds, of course, and is packed off to Georgia where he meets his opponents. The brash American. The Brazilian capoeira expert. The North Korean tae kwon do expert. A Greek. A Croat. And, most to be feared, the Colombian(Mark Zaror).

While all of the other fighters are forced to do hard labor, the Colombian – the fighter backed by the host prison – is left to live in relative luxury. While the others are denied basic food, the Colombian has drugs hand delivered by the warden. ScottAdkins plays Boyka – the villain of the last installment – here as a gruff antihero looking for personal redemption. All the story stuff works as it should with this film and will make MMA junkies happy.
Movie Content: 8/10

The print is presented in 1080p/VC-1 with a 1.85:1 aspect ratio. Color is vibrant and bold in this transfer. A very good example of that is the color red, when blood splats on the floors, walls, and in the air. Blacks are deep providing a nice crushing effect. Fleshtones are detailed throughout the entire print. Details are well done throughout the film with some scenes looking really good. There is also a thin layer of grain which never gets distracting and very consistent.
Video Quality: 9/10

The audio is presented in DTS-HD MA lossless 5.1 mix. I found this mix to be immersive when there is action on screen and there are many times throughout the film where there are plenty of fight scenes. I felt as if I were in the center of the action. The score was also well implemented into the mix to add to the atmosphere of the film. Dialogue is clean through the center channel.
Audio Quality: 9/10

So in the line of such movies as Bloodsport, The Quest, Best of the best, and other fight tournament movies this is pretty good. The fight scenes were well done and the story never got in the way of the fact that we want to see the fights. For this genre this is pretty good not the best of the bunch but it never tries to be more than what it is.
Overall Rating: 8/10