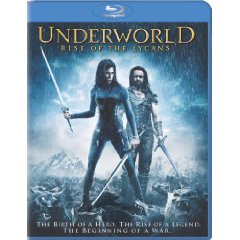 This prequel to Len Wiseman’s Underworld and Underworld: Evolution is distinctively different, especially minus the nimble vampire warrior star, Selene (Kate Beckinsale). Underworld: Rise of the Lycans takes its cues from the vampire/werewolf battles that occur in the other films, but director Patrick Tatopoulos focuses here on the young werewolf Lucian’s (Michael Sheen) rise to leadership. Rise of the Lycans is set mostly within the walls of vampire lord Viktor’s (Bill Nighy) castle, so the film’s silver, black, and blue palette reflects a world happening under moonlight. From the outset, when Viktor brings Lucian, the first werewolf, into the world, this villainous bloodsucker’s daughter, Sonja (Rhona Mitra), is smitten with Lucian’s hairy appearance and instinctual intelligence. As years pass, Lucian grows tired of watching his race suffer slavery and imprisonment, and recruits a human named Raze (Kevin Grevioux) to assist rebellion. This archetypal plot is not so riveting, and what carries Underworld: Rise of the Lycans are the battle scenes between vampires and werewolves, which are excitingly fast-paced and brutal. The whole film adopts a medieval battlefield aesthetic that carries an otherwise clichéd story about illicit love and freedom fighting. Some characters, like the traitor vampire Tannis (Steven Mackintosh), also intrigues throughout, as one guesses who he will ally with. Underworld: Rise of the Lycans may not be the finest film in the werewolf and vampire archives independently, but its mixed monstrosity makes it unique and entertaining, especially on a big screen.

Anyone who has seen the previous movies in the Underworld series will be pleased with this prequel. It competently adds to the story, and fills in details that do nothing but accentuate the action and plot of the Underworld time line.

This was the dark and gothic prequel to the first 2 underworld films. In Lycan’s, we at last learn the origins of the vamp/lycan conflict. We also meet Lucian, the moses-like progenitor of the werewolf species. As usual, there is a lot of action, great special effects hot-looking vamps and somewhat grungy were-men. While I prefer the series set in modern day, this story was exciting enough to keep my attention. Lucian was a sympathetic character, strong, brave, and loyal, and his girlfriend, Princess Sonja beautiful and willful.

The vampires were easily overwhelmed by the brute force of the Lycans and even when it came to sniping at them from a distance seemed unable to really inflict too much damage. The vampires let their guard down thinking that the Lycans were not a smart or superior race. Their arrogance made you wonder how they held on to the power for so long. Overall I enjoyed this film just as much as the original two making this an excellent entry in the franchise.
Movie Content: 9/10

The print is presented in 1080p/AVC MPEG-4 with a 2.40:1 aspect ratio. The stylized colors used in this prequel do an excellent job in bringing the dark and gothic look of the film come to life. Dark tinted blues are the primary colors that are used in the film. Blacks are deep. I found the details to be excellent considering that this is a darker looking film. The image quality is crystal clear providing some of the best visuals in the entire series.
Print Quality:9.5/10

The audio is presented in Dolby TrueHD 5.1 mix. The sound in ‘Underworld: Rise of the Lycans’ is fantastic and rocks the house during the many action sequences. This mix provides a really crisp and clean sound. From the battles to the transformatoins of the humans to Lycans the mix makes it sound like you are in the center of all the action. The rears were working like a workhorse during the action sequences. The dialogue portions of the film is excellent and comes through very clear and well balanced to where I didn’t have to increase the volume once. This mix stays consistent throughout the entire film with the entire sound field.
Audio Quality: 9.5/10

The reviews were not that gracious to ‘Underworld: Rise of the Lycans’, but I enjoyed the film from start to finish. This prequel wasn’t necessary as a lot of the war between the vampires and lycans was told in the first two films, but this helps flesh out the story even more. Fans of the film will be excited with the plethora of extras. The film on Blu-ray boasts excellent video and audio. This is highly recommended.
Overall Rating: 9/10