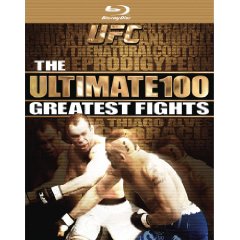 For 16 years, the Ultimate Fighting Championship has been the gold standard in combat sports. Now you can re-live the 100 greatest fights in UFC history with this once-in-a-lifetime collection. Featuring all the greats of the Octagon, from Royce Gracie and Chuck Liddell to Matt Hughes and Randy Couture, this set contains the most dramatic, explosive and memorable battles of the UFC in their entirety from 100 down to the greatest UFC fight of all time.

These fights are shown in their entirety, not just the highlights shown on Spike-TV. While I enjoyed this set there were some fights which went missing. It could have been better though if personal differences between Dana White and some of the former UFC stars did not effect the selection of the fights. As an early fan of the UFC, there are many fights missing from this collection. Most of those, featuring Tito Ortiz, Frank Shamrock, Robbie Lawler, etc…. all fighters who (at the time of the creation of this collection) are not on good terms with the UFC president, Dana White.

Some of Frank Shmarocks fights, Tito Ortiz vs Ken Shamrock 1, Wanderlei Silva vs Rich Franklin, Shogun vs Mark Coleman 2 and a few others did not make the list due to the issues with Dana White. A lot of these fights are on Ultimate Knockouts and compilations like the best of 2007 and the best of 2008 DVD sets. I know that these fights were “voted” on but still there are some that could be switched.

In the build-up for UFC 100 over the summer, Spike TV aired a 5-episode series called UFC: ULTIMATE 100 GREATEST FIGHTS, where they counted down the 100 greatest fights as voted on by UFC fans.  With fans voting on a list like this, it is sure to create controversy and debate, but one thing for sure is that these were all awesome fights regardless of numerical order! Unlike, the television special which aired clips of the fights, all 100 complete fights are included in this Blu-ray collection.

The audio is presented in Dolby Digital 2.0 mix. Again, staying with the current source material like we did with the video presentation, the audio is presented in DD 2.0 mix. Definitely this will be a front heavy presentation. Dialogue is clean through the front surround speakers, yet I could only imagine how this could have sounded if they would have gone back to give it a 5.1 mix.
Audio Quality: 8/10

If you are a fan of the UFC and have been for the past 16 years, you will not want to miss out on this set spread across 6 Blu-ray’s. I wish that there were more fights in this from the earlier years considering that some of the most influential fighters were passed on due to possible issues with Dana White it is a shame. The video and audio presentation is a representation of their original source material. Included with the special features is the entire 5 episodes from Ultimate 100 Countdown Show.
Overall Rating: 8/10