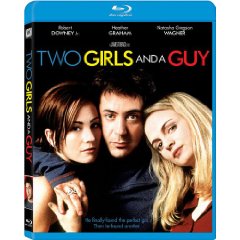 Two very different but equally smashing young women find themselves sharing the sidewalk outside a Soho apartment. Both blond Carla (Heather Graham, pre-Boogie Nights) and the dark-haired Lou (Natasha Gregson Wagner, daughter of Natalie Wood) are waiting for the same guy, an actor named Blake (Robert Downey Jr.), who–unbeknownst to either–has been sleeping with both of them for the past year. They break into Blake’s pad and trade can-you-beat-that? anecdotes of his duplicity while waiting for him to show. Show he eventually does, and the mind games begin.

Two women meet while waiting for their respective boyfriends who, they quickly ascertain, is one and the same, a New York actor. They lie in wait for him in his loft as he returns from a job in LA. First one, then both women proceed to impel him to reveal and explain his deception and insist on forcing him to identify truth and meaning.

This essentially comes off like a staged play, not a flaw in itself necessarily but the filmmaker invested energy in the concept and characters, not in actual filming techniques that might better define this as a cinematic art work apart from the drama. The setting is a stunning loft that holds attention as much as the characters; it adds conceptual commentary and allows for some interesting blocking-but a stage play could have replicated it and made similar use.

Robert Downey, Jr., gives a remarkable performance as the guy lost in his deceptions. Natasha Gregson Wagner completely owns her part and takes it to the core and back. The motivation of Heather Graham’s character is not always clear though what her character does and says always propels quality changes in the action.
Movie Quality: 6/10

The print is presented in 1080p/AVC MPEG-4 with a 1.85:1 aspect ratio. The picture quality is a mixed bag with this film on Blu-ray. There are times where the print looks very good and others where it just looks drab. Colors are presented well, but do not always have true pop to them. In the scenes that falter colors have a bit of a washed out look in them at times. Blacks are deep. It also affects details at times, where the image can appear out of focus and then there are scenes where you get a very detailed scene that looks good.
Video Quality: 6/10

The audio is presented in DTS-HD MA lossless 5.1 mix. This is a film that you should not go in expecting much dynamic or ambient noise into the soundfield. It is a front heavy experience with very little coming into the soundfield from the rears. I think that I found the opening sequence of the film to have the most sound into the soundfield.
Audio Quality: 8/10

‘Two Girls and A Guy’ is not my kind of film, albeit both Downey Jr. and Graham having strong performances. I found the video quality to be a mixed bag as at times the film looks good while at other times it doesn’t. Much of that has to do with a smaller budget of $1 million dollars. If you are a fan of the film you will not be disappointed and worth picking up, for others give it a rent first.
Overall Rating: 8/10