Two and a Half Men: The Complete Fifth Season

Posted in DVD Reviews by George Theofanopoulos on 18 May 2009 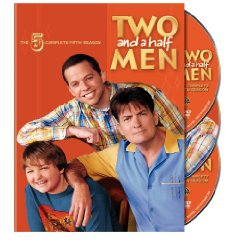 Televisions #1 comedy celebrates five seasons of funny with big laughs and hilarious new storylines. Charlie (Charlie Sheen) tops the charts as kiddie-song sensation Charlie Waffles. Alan (Jon Cryer) at last meets the perfect woman who just happens to be dating Charlie. Jake (Angus T. Jones) starts junior high, armed with reams of “helpful” advice from Alan and Charlie. Evelyn (Holland Taylor) ties the knot for the fifth time (lots of guests at the wedding, lots of cops at the reception). And as always, Berta (Conchata Ferrell) deals with it all by dealing out a royal flush of deadpan zingers. The guys are in and the welcome mat is out at everyones favorite Malibu beach house. Have a great time!

For those who haven’t had the pleasure of seeing this top-rated series on TV, it’s about the lives of two brothers, one of the brother’s son, and the many people, especially women, who surround them. When his wimpy younger brother Alan Harper (Jon Crier) becomes separated from his wife and moves out of their house, he has to move in with Charlie, his older brother (played by Charlie Sheen). Alan shares custody of his son Jake (Angus T. Jones), who was 10 when the series began and who stays with them part-time. The “half a man” in the title of this sitcom is in reference to the fact that Jake isn’t an adult yet.

Charlie Sheen and Jon Cryer have a chemistry that’s nearly unmatchable. Putting these two guys together was a stroke of genius…there’s a temptation to compare them to Matt Leblanc and Matthew Perry and their chemistry on “Friends” amped up a notch or two. The character of Jake is the perfect foil for these two, and the sarcasm of their housekeeper all seems to be perfectly timed. The writing is edgy and truly funny, and just when you think they couldn’t come up with anything wilder…they have.
Movie Content: 9/10

If you liked the first four seasons you’ll like this one too. More of the same kinds of fun. Sexually suggestive humor and good looking women.
Overall Rating: 8.5/10