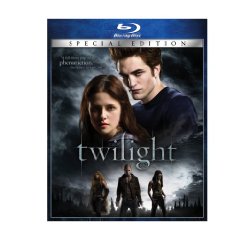 In 2008 Director Catherine Hardwicke departs from her usual sexually explicit world of pubescent temptation and explores a good old-fashioned romance in “Twilight”. While it is nearly difficult to take a 500+ page novel and adapt it to the screen clocking in at 122 minutes, there were many fans happy with this film and others that were upset. The first book in the series made its debut in 2005 which sold like hotcakes. The film would go on to make a worldwide total gross of $351 million dollars with a $37 million dollar budget making this film a huge success.

The big-screen adaptation of Twilight, Stephenie Meyer’s bestselling vampire romance, is aimed squarely at its key demographic: teen girls whose idea of Prince Charming is a brooding, pale, undead teen who could kill you instantly at any moment. Such a prince is more fascinating than frightening to new girl Bella Swan (Kristen Stewart), who moves to the rainy-gray town of Forks, Wash., to live with her dad (Billy Burke), the local sheriff who’s puzzled by a series of “animal attacks.” On her first day at school, Bella appears to (visibly) nauseate her lab partner, Edward (Robert Pattinson). Turns out the scent of her blood is this vampire’s “brand of heroin,” and his struggle not to kill her causes an irresistible pull toward her. Whether he’s attracted for the normal reasons or because she smells especially sweet to him is vague in the book and even less clear on-screen; nonetheless, Bella falls hopelessly in love with Edward, which sets her on a dangerous path when a few nomad vampires show up in town, one particularly keen on tracking the human.

The acting was also very good. It was interesting how Kristen Stewart (Bella) interacted with her father Charlie, played by Billy Burke. James (Cam Gigandet) was one of the best characters in the movie, beside Jacob. He has a great presence on screen. He really took on the role as the predator hunting its prey. Robert Pattinson (Edward) played his role fairly well, but there has been an outcry by fans of the books that he wasn’t fit for the role. I thought he did a good job in his role, provide it I never read any of the books.

This is a romantic take on the vampire genre for those that might be interested but kind of skeptical. I can go one way or the other with romantic takes on horror type of characters, and this one is very well done which kept me entertained till the end of the film.
Movie Rating: 9/10 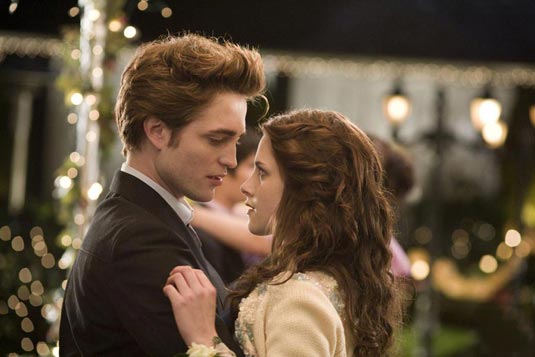 The print is presented in 1080p/AVC MPEG-4 with a 2.40:1 aspect ratio. ‘Twilight’ is a very stylistic film and it is very apparent from the moment the movie opens Director Catherine Hardwicke uses a muted color palette to convey that we are viewing a vampire film. If I do have one complaint, there was too much make-up used on the vampires. In high definition on Blu-ray, it becomes very apparent. It goes to show what excellent details the film has when the make-up stands out so well. There is a hint of grain throughout the print providing that much needed atmosphere.
Print Quality: 9/10

The audio is presented in DTS-HD MA lossless 5.1 mix. I was a bit surprised by this audio mix the first half of the film as it lacked quite a bit of a punch. This is not just with effects alone, but dialogue was on the lower side of the spectrum on where I keep my audio set at usually for DTS-HD tracks. Once I raised up my audio a few notches, dialogue was clear as a whistle with some excellent depth. This is a front heavy experience from start to finish. During the second half of the film, the score and effects do kick in giving this a better audio presentation in the soundfield.

Note: There were several times throughout the film that I experienced dropouts in the audio mix for less than a second. I am not the only reviewer that has experienced this issue as another reviewer has also confirmed this problem. But in no way does it detract from my enjoyment of this great film.
Audio Quality: 8.5/10 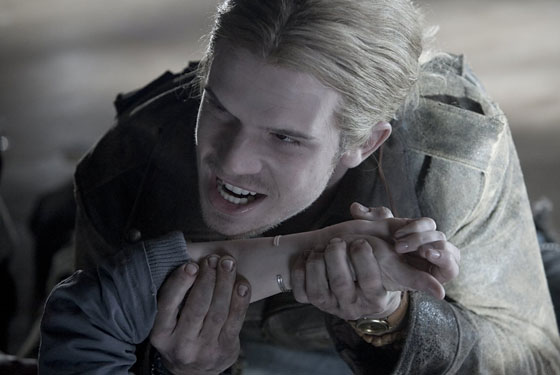 All of the special features are in high definition except for the music video which are in standard definition. As surprised as I was by the quality of the film, the same I can say for the extras. There are some quality extras featured on this disc that will make fans of the film very happy.
Special Features: 9/10

I saw the movie without having read any of the books, all I knew was it was a vampire film so I was intrigued. Kristen Stewart and Robert Pattinson have some excellent chemistry on screen making for an interesting film. I was entertained from start to finish and would recommend this film to anyone looking for a vampire film that is different from the usual of this genre. I highly recommend this film on Blu-ray with excellent visuals and some decent audio with a minor issue.
Overall Rating: 9/10