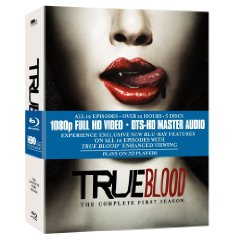 Alan Ball’s True Blood series works well for television, as it has enough sensationalism to tantalize and enough story girth to make the viewer care about the characters. That one can finally invest emotion into monsters, including an undead Civil War victim, a transformer who can shapeshift into various animals, and a female mind reader, speaks volumes about America’s willingness to accept fantasy. Of course, television has always produced good fantasy shows (I Dream of Genie), but True Blood’s Southern Goth brand of fun horror is more macabre and more perverse, not to mention gorier, than most shows of its kind to date. Adapted from Charlaine Harris’ Sookie Stackhouse novels, True Blood thrills because of its equal blend in each episode of erotica, humor, tragedy, mystery, and fantasy.

Set in a rural, swampy Louisiana parrish, the show centers around Sookie Stackhouse (Anna Paquin) and her clan, sweet grandmother Adele (Lois Smith) and air-headed brother Jason (Ryan Kwanten). Illicit love is spawned early on, when Sookie saves vampire Bill Compton (Stephen Moyer) from having his blood stolen in the parking lot of Merlotte’s diner, owned by Sam Merlotte (Sam Trammell) who completes what will form a complex love triangle. As tensions between Sookie’s suitors loosen or tighten, many side plots, such as her African American best friend Tara’s (Rutina Wesley) struggle with an alcoholic, Bible-thumping mother and her brother’s dangerous crush on drug addicted hippie, Amy Burley (Lizzy Caplan), keep one wondering who will succeed in this podunk place. The main tension throughout, however, is a race war waged between vampires and humans. As murders of “fang bangers” occur (human girls who let vampires bite them) and dumb policeman Andy Bellefleur (Chris Bauer) fails to find clues, one sees the metaphorical implications of vampirism and feels deeper resonance with what can be a downright trashy show. Gossip galore, especially about what kinds of babies interbreeding will produce, is rampant. One of the funniest characters is Tara’s flamboyant cousin, Lafayette (Nelsan Ellis), who deals drugs, works as a fry cook, and services the local white politicians, while making sure he’s always up in everyone’s business.

What makes True Blood smarter than pure soap opera is the parallels it draws between its monster mash and actual, familiar societal problems. Sookie and her friends watch the news, where Evangelicals bash vampires and prohibit mixed marriage, and everyone is addicted to V, a.k.a vampire blood, that effects like psychedelic heroin. Even its gore reflects a mix of serious and silly, as vampires explode into red, sticky goop. Though it may not be attempting to qualify for the best vampire footage ever shot, True Blood is as addictive as that substance the town’s youth obsesses over, which is a metaphor in itself.

Based on the Sookie Stackhouse novels by Charlaine Harris, True Blood’s first season was a delightful mix of fantasy, blood and sex that stayed true to the overall story Harris wrote, but added in some usually much needed depth. Sookie works as a waitress in a bar and has the curse/gift of being able to read minds. One day, a vampire named Bill enters Merlotte’s, the bar, and Sookie finds herself attracted to him as he does to her. At the same time, someone is killing women in Sookie’s town and as the clues start pointing to Sookie’s man whore of a brother Jason, she starts to investigate.

True Blood is an exciting and creative show based on the Sookie Stackhouse novels. I am usually disappointed by movies/shows that are based on books because they can be so abbreviated due to time constraints. However, True Blood- season one is twelve hours dedicated to the first book in the Sookie Stackhouse series. Not only is it thorough, but it has it’s own creative twists and turns so that it is not exactly like the book. In this series, you learn alot about the supporting characters as well. This is really a great show.
Movie Content: 9.5/10

The print is presented in 1080p/AVC MPEG-4 with a 1.85:1 aspect ratio. Having seen this show twice,  once on HBO during its run and now with its debut on Blu-ray, this show is absolutely stunning. HBO knows how to deliver with their television shows on Blu-ray. Colors are vivid and strong in a good portion of the scenes, but there are some scenes where colors do look a bit too saturated. Sharpness and details are also very good, with inky looking blacks. There is grain throughout the show, but it translates so well that at times you don’t even notice it. Fleshtones are natural and accurate considering the color palette jumps. I was very pleased with how this television show has translated to Blu-ray.
Video Quality: 9/10

The audio is presented in DTS-HD MA lossless 5.1 mix. I was impressed at the DTS-HD mix that sound effects actually filled the soundfield so well. Since this is a dialogue driven television show, the audio peers through the center channel ever so cleanly with no apparent issues. The rears are at constant work whenever there is sound effects which come through the soundfield immersing the viewer. There were times where the vampires would fly across the room and you hear the panning effects through the rears. Fans of the show and newcomers will not be disappointed at all.
Audio Quality: 9.5/10

I can’t say enough about ‘True Blood’ and what a great television show that this is from HBO. The first few episodes take a bit of time to get the viewer hooked. It is a slow show with some slow buildup initially. Once the fifth episode rolls around, you will be hooked all the way to the end of the show. On Blu-ray the show offers reference quality video and audio for a television show. This is highly recommended.
Overall Rating: 9/10