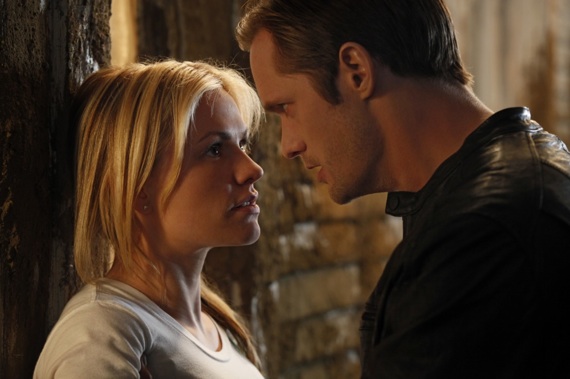 The Maenadian reign of terror may be over, but Sookie Stackhouse and the townspeople of Bon Temps face a new calamity that makes the bacchanalian evils of Maryanne Forrester seem tame by comparison. In Season 3, Sookie desperately tries to locate her fiancé, ending up in a netherworld of human and undead interlopers, among them the powerful Vampire King of Mississippi, Russell Edgington. 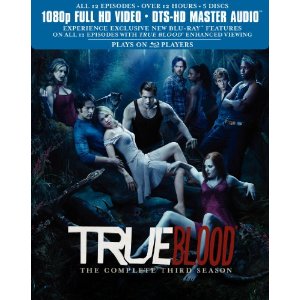 Season 2 was a litte disappointing as the focus of the storyline got away from the vampires. This season has introduced some new creatures (werewolves and other shape shifters) but has mainly focused on the TB vampire lore. Bill has been kidnapped and is the clutches of the Vampire King of Louisianna. Eric has asserted his power and has usurped his Queen. Sookie’s powers are being expanded and we learn that mind reading is only a small sampling of her powers.

This season is a lot more fun as Bill and Sookie have to re-kindle what has been lost. Jason is still lost. The werewolves, though a part of this season, are not the unstoppable creatures that they normally are. In fact they are only slightly stronger than a basic shape shifter. The one werewolf that has some morals and has befriended Sookie is the best of the new characters.

A bunch of characters that were prevelent in the first two seasons have already been disposed of but Lafayette and Tara still remain. I am assuming we will learn what Sookie really is by the season’s end and a showdown with the Vampire King is probably in the cards. I am sure it will end with another cliff-hanger which will be bigger than the first two seasons.
Movie Quality: 9.5/10

The print is presented in 1080p/AVC MPEG-4 with a 2:35:1 aspect ratio. With each season on Blu-ray, the video presentation keeps getting better and better. ‘True Blood’ is a show that is dark in each episode which rules the roost. HBO engineers have been doing an excellent job with the dark scenes when it comes to Blu-ray and even the show on broadcast television looks excellent. Colors are fantastic and very colorful bringing the color palette to life. Black levels are deep and it shows very well with this season on Blu-ray considering that there are a lot of dark scenes. There is grain throughout the show, but it translates so well that at times you don’t even notice it. Fleshtones are natural and accurate. Details are fantastic and some of the best that I have seen in high definition.
Print Quality: 9.5/10

The audio is presented in a DTS-HD MA lossless 5.1 mix. Since this is a dialogue driven television show, the audio peers through the center channel ever so cleanly with no apparent issues. The rears are at constant work whenever there is sound effects which come through the soundfield immersing the viewer. I was not disappointed at all with the sound and it took me by surprise as to how much better sounding this was than the second season.
Print Quality: 9/10

Season 3 was very entertaining and made up for the not so great plot-line through part of Season 2. This season answered questions, opened new questions, ended each show with the perfect cliff-hanger (one of my favorite things about True Blood), and left me looking forward to next week. This is highly recommended on Blu-ray if you are a fan of the series..
Overall Rating: 8.5/10