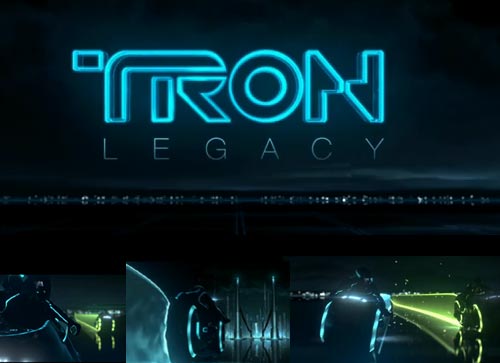 The luminescent lines and shimmering surfaces of Tron: Legacy will tantalize anyone who’s lusted after the latest smartphone. The long-ago disappearance of his computer-genius father has left Sam Flynn (Garrett Hedlund, Four Brothers) with existential ennui and a lot of money. When he discovers his father’s secret workshop, he gets sucked into a computerized realm ruled by a megalomaniac computer program named Clu–who just happens to be his father’s virtual doppelganger. To find his real father (Jeff Bridges, reprising his role from the original Tron, with a bit of his role from The Big Lebowski thrown in for kicks), Sam has to fight in gladiatorial games, drive in digital demolition derbies, and be stripped and dressed by slinky pneumatic babes. For all the techno-babble and quasi-philosophy the characters spout, this is a movie without an idea in its shiny head. It would be pointless to describe the many sillinesses because Tron: Legacy isn’t actually trying to be smart; it’s trying to look cool. It succeeds. Olivia Wilde (House) looks like the coolest action figure ever (if the entire movie could be nothing but the shot of her lounging on a futuristic sofa, it would be a masterpiece of avant-garde gizmo-fetishism). The facemasks are cool, the glowing skintight outfits are cool, the light-cycles are really, really cool–and let’s be honest, it’s all about the light-cycles. That’s what the audience for Tron wants, and that’s what Tron: Legacy delivers. 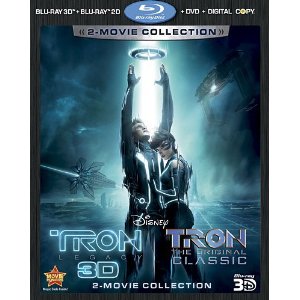 TRON Classic Review: When Tron came out in 1982, it was intended to be a visually stunning parable against the powers of computers and technology. More than twenty years later, the movie plays more like a nostalgic ode to the early 1980s, than a simple good vs. evil morality tale. Tron evokes the heady days when video games like Pac Man, Defender and Centipede ruled the arcades and when everyone owned a Commodore 64 or an Atari 2600 — the eight track of personal computing. Writer/director Steven Lisberger creates a flashy, neon-drenched world, a cybernetic version of Social Darwinism where lowly computer programs must participate in gladiatorial battles against the Master Control’s ruthless minions. Even though the computer effects look primitive now, back then they were considered ahead of their time. Fortunately, Lisberger has not remastered the special effects with contemporary computer graphics (take note George Lucas). There is a certain clunky charm to the effects that makes Tron all that more endearing to its fans. Tron is one of those rare examples where style over substance works. The computer world that Lisberger and his team worked so hard to create is rich in detail. It also plays on our romantic notions of what really goes on inside our computers — not a collection of microchips and circuit boards but a vast world where programs fight each other for survival. It’s no wonder that visionary science fiction writer, William Gibson once commented in an interview that the cyberworld in Tron is how he envisioned the cyberspace in his novels.

TRON Legacy Review: Tron: The Legacy is the sequel to the moderately successful 1982 film Tron which was released 28 years ago. Newcomers to the series (like myself since I never saw the original film) will find it easy to get into the world that the film creates since the movie centers around the original heroes’ son a young man named Sam Flynn who is also a newcomer to the computer world of Tron. As he learns about this new world, we the viewers get to learn about this digital world. The movie begins in 1989, where we (the viewers) are introduced to a seven year old Sam being told a bedtime story by his father Kevin Flynn. After Kevin tells the wide-eyed and eager young Sam part of this magical story, he puts him to bed, and promises to finish the story later. This doesn’t happen since Kevin goes missing, leaving behind his young son. Fast-forward twenty years and Sam has grown up from an innocent boy to a directionless young man who wastes his potential and plays annual pranks on his dad’s company ENCOM International. Luckily for Sam his life of mediocrity comes to an abrupt end when he accidentally causes himself to be transported to the digital world. It is here in this futurstic, black, barren, and very shiny world of Neon lights that Sam meets two versions of his father. The first version of his father that Sam meets is CLU 2 (Codified Likeness Utility 2, being that Clu 1 was derezzed in the first Tron movie). Clu 2 is a program that looks like his user Kevin Flynn did when he was younger. Clu 2 also lacks any traces of humanity including any kind of care for Sam which makes their first meeting a sad one. Sam also meets is real dad who has now grown old and wise from hard lessons he’s learned from bad decisions and an unrealistic desire to create a perfect system. During Sam’s meeting with his father, he learns that his father’s creation Clu 2 revolted against him and that Clu 2 has not wavered from his father’s dream of perfection. He also learns that his father has been trapped in this digital world for 20 years. Naturally, Sam wants to escape this digital world and take his father with him; however, leaving is a much harder thing to do than arriving. If you want to know more about the escape plan and the adventure associated with it I’d recommend you watch the film. Visually speaking, Tron: The Legacy is certainly very pretty to look at, has a great musical score, fantastic fight sequences, and great costume designs (they’re modern, hip, sleek, and sexy). These visuals are especially impressive with the graphics they used to de-age Jeff Bridges and transforming him into a younger version of himself). It’s an effect that has to be seen to be believed especially when young Jeff comes face-to-face with old Jeff.

Tron: Classic is presented in 1080p/AVC MPEG-4 with a 2:20:1 aspect ratio. For those who watched “Tron Legacy” first, watching an older science fiction film may either put those in awe of what was accomplished at that time or turn people off to see how different the two films are in visual effects. With that being said, one can not expect anything significant in visual effects compared to today’s films but as a fan of the original film, I can tell you that this is the best looking version of the film to date. One of my biggest worries about watching “Tron” was that the film’s effects may show some imperfections in HD via Blu-ray. But in this case, I felt the film, especially of its use of light was amazingly well-done for that time period and it looks great on Blu-ray!. There are some light imperfections and flickering but it’s important to note that even the creators talked about this challenge as they accidentally used the Kodak film in the wrong order and thus, for the film, they had to make up for it by adding visual effects and sound effects to compensate for some of the unusual light flickering for the film. Tron: Legacy is presented in 1080p/AVC MPEG-4 with a 2:35:1 and 1.78:1 aspect ratio. The film uses a dynamic aspect ratio in which to preserve the original IMAX theatrical viewing experience, the picture image alternates from both aspect ratios. There is no choice to change this. Still, this film looks absolutely fantastic. The focus of the filmmakers to respect the original film was to make sure there was a good use of light throughout the film but also to showcase the darkness with its rich blacks, strong contrast and vibrant colors that pop from the inky blacks. The detail is also fantastic in this film and it’s a visual feast on Blu-ray. For a film that uses a lot of intense colors, there are no banding or artifacting issues whatsoever. Make no doubt about it, this is a gorgeous transfer that videophiles and Tron fans will absolutely love on Blu-ray.

The audio for Tron: Classic is presented in a DTS-HD MA lossless 5.1 mix. I wanted to hear how lossless enhances the experience of the original “Tron” and sure enough, we get clarity in dialogue and action sequences that utilizes LFE and surround channels but for the most part, is a front channel-driven film that sounds great compared to its DVD counterpart. If anything, I do enjoy the clarity of the lossless soundtrack for “Tron” but I knew in my hear that the film where I had high expectations audio-wise would be “Tron Legacy”. The audio for Tron: Legacy is presented in a DTS-HD MA lossless 7.1 mix. The first thing that stands out is the lossless soundtrack by Daft Punk. It’s electronic music that enhances the overall feel of “Tron Legacy” and it’s a film that manages to take every opportunity, may it be a vehicle, crowd ambiance, blast or any action-related sequence and utilize every channel possible. There is a tremendous amount of LFE when it comes to the explosions or when a large vehicle is flying nearby, you can hear and feel that rumble! I simply had a smile on my face when I was hearing the surround and rear surround channels at work. To many films where the surround and rear surround channels are just utilize sporadically but for “Tron: Legacy”, it’s constant throughout the film. I have no doubt that audiophile’s will fall in love with this lossless soundtrack.

Filled with plenty of action and enough science fiction know how to please fans of the genre, TRON LEGACY lives up to the expectations that many fans will have for the film. I found it to not only live up to the original but to take it into a new dimension as well. It was fun, it was fast and it made me want to watch the old one beside this one and that makes this a legacy fulfilled. Overall Rating: 9.5/10