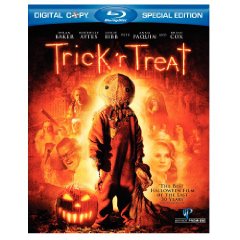 A creepy, darkly comic celebration of the scariest night of the year from producer BRYAN SINGER (director of X-Men and Superman Returns) and writer-director MICHAEL DOUGHERTY(co-scripter of X2 and Superman Returns). Trick ’R Treat takes the Creepshow/Tales from the Crypt approach to nefarious new depths with four interwoven tales set on Halloween night: a high school principal (DYLAN BAKER) moonlights as a vicious serial killer; the quest of a young virgin (ANNA PAQUIN) for that special someone takes a gruesome turn; a group of teens carries out a cruel prank with disastrous consequences; and a cantankerous old man (BRIAN COX) battles a mischievous trick-or-treating demon.

The film is basically four stories that occur over the course of one Halloween night in a sleepy little town where they really take Halloween seriously. Starring, Dylan Baker, Anna Paquin, and Brian Cox, each story intersects with the other at some point in the story, but is told in a mostly linear fashion. We do get is some rather interesting stories of: A principal that teaches a boy a lesson about the true meaning Halloween, while also engaging in some possibly homicidal tendencies; A young woman looking to make her first time a special one, but is stalked by a hooded man; Four kids out Trick or treating go to the site of a horrible town legend and find out legends usually spring from the truth; And an old man who could be called the Scrooge of Halloween gets a visit from someone wanting to show him the holiday spirit, and they aren’t three ghosts showing him his past. The actors all did great jobs, and you could tell they were having fun.

All of this could be your run of the mill horror stuff, but the way it’s executed is what makes the film so much fun. Throughout the movie you are constantly following three stories and the characters within, but since it’s all one night, and it’s such a small little town, the characters keep reappearing in each others stories. You’ll see the same trick or treaters throughout the film, the same partygoers and so on and so forth, and through it all there’s Sam. Sam is a blast and he doesn’t even say anything. He’s sort of just there and people seem to think he’s just a normal kid (albeit with one weird costume and big head) and that fact alone lends to the fun of the film. If you see Sam it’s not a good thing. The movie had a few twists and surprises I didn’t see coming. This one however gets it right. It points you in one direction and takes you in another in some cases.

And while I was amazed at how intricately plotted it actually was, I was surprised because Trick ‘r Treat isn’t necessarily a scary film. It’s just a fun, smartly written and expertly filmed horror film that was a robbed a theatrical viewing. It’s quickly become a go-to horror film that I will probably watch, year after year, around Halloween. Definitely recommend it to fill your Halloween movie-watching.
Movie Quality: 9/10

The print is presented in 1080p/VC-1 with a 2.40:1 aspect ratio. This is a very stylized film with various dark colors used throughout. The color palette takes advantage of colors such as oranges and reds standing out the most. Black levels are deep with an ink like look. Details are excellent providing various sense of depth. Scenes up close and when the camera pans away show some nice details. I was surprised how nice this darker looking film looks in high definition.
Video Quality: 9/10

The audio is presented in Dolby TrueHD 5.1 mix. This mix does a good job from a dialog and soundfield perspective. The surrounds work very well with the sound effects that are used from the score. Dialogue comes through the center channel very clear and crisp. This is a very immersive sound mix with bass also being properly spaced out.
Audio Quality: 8.5/10

Not only was ‘Trick r’ Treat’ a surprise of a film, it was actually a nice refreshing horror film. Then add a nice audio and sound mix for this film on Blu-ray, and you will not be disappointed as a horror fan. I highly recommend picking this up as a purchase.
Overall Rating: 8/10