Posted in DVD Reviews by George Theofanopoulos on 07 July 2011
A year has passed since the events of Sunbow’s third season, and the war between Convoy’s (a/k/a Optimus Prime) Cybertrons and the Destrons has finally come to its conclusion. Peace once again reigns supreme over the galaxy: but the game quickly changes with the emergence of a new breed of Transformers . . . the Headmasters! Now you can finally watch the rarely seen Japanese series that’s had Transformers and anime fans talking for over 20 years! Includes the original Japanese audio with brand-new English subtitles! 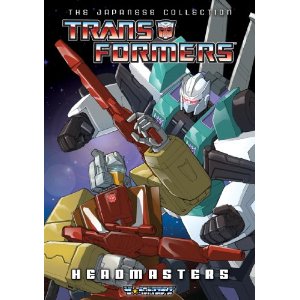 At long last, after nearly two decades of having to suffer through overpriced bootlegs and imports, the U.S. ‘Transformers’ fan base finally gets a proper release of the Japanese series!

As any online summary will tell you, the Japanese ‘Headmasters’ ignores the ‘Rebirth’ mini-series and follows its own take following the events of ‘The Return of Optimus Prime’ (or Convoy, as he is called in the Japanese series). Parents of younger ‘Transformers’ fans may want to be aware that the tone of the series is a tad darker than the U.S. episodes mainly due to character deaths throughout the series (a certain character sacrifices himself AGAIN), and by U.S. standards, there is a substantial amount of profanity.

My major gripe with ‘Headmasters’ is that in general, the writing is very weak and often seems as if it is trying too hard to mimic the previous U.S. ‘Generation One’ (G1) series. Even the ‘lip syncing’ of the characters in early episodes seems as if it is trying to reproduce that of the original English language shows. Keep in mind that anime of the late 80s was not being marketed as heavily to the western world as it is today. In that respect, ‘Headmasters’ curiously comes off as if it were in some ways a half-serious parody of the U.S. shows (such as ‘G.I. JOE’ and ‘Transformers’) for which Japanese animation studios had been contracted. (The subsequent series, ‘Super God Masterforce’ and ‘Victory’, are stronger for taking their own direction.)

Some characterizations are extremely inconsistent to the original series. For example, Soundwave is extremely ‘chatty’, and Galvatron is nowhere near as insane as in Season 3. Also, if you couldn’t stand Wheelie and Daniel Witwicky, be warned that they are fairly prominent in this show. The perk, however, is getting to see familiar characters as well as plenty of new (at the time) ones, as the world of the Transformers was ever-satisfying in creating inventive new robots and their alternative forms. Also, look for the appearance of the Beastformers (known in the U.S. as ‘Battle Beasts’)..

‘Headmasters’ is by far considered the weakest of the Japanese ‘G1’ series. However, the appeal for U.S. fans is “the continuing adventures” of the original G1 cast of characters. For hardcore fans, this is a must-have.
Overall Rating: 7/10